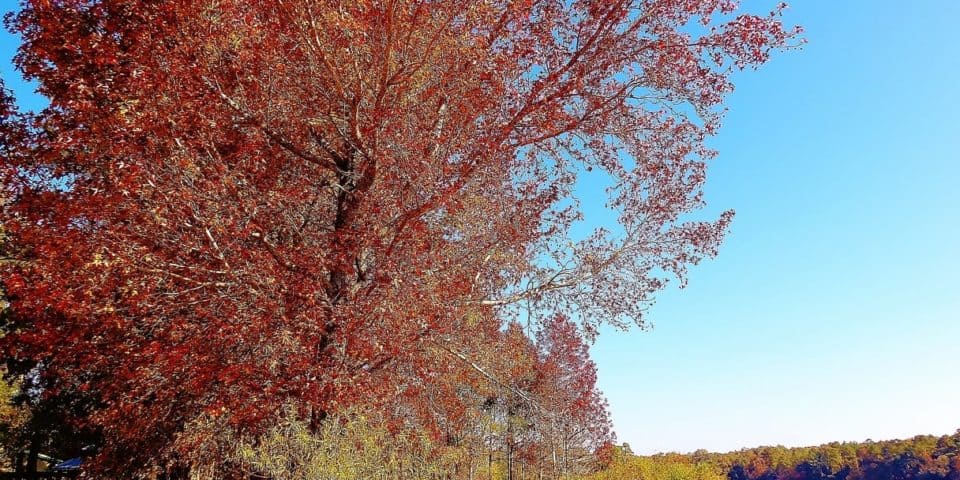 Maple tree in Chipley Florida image by pxhere.com
Share on FacebookShare on PinterestShare on WhatsApp

Although it is easy to think only of palm trees when you think of Florida, the truth is that there are more than 300 species of trees in the state, so regardless of the type of tree you favor, you can likely find it easily with little trouble. Common types include pines, oaks, cypresses, and ash trees, and of course, maple trees for those who love bright, colorful leaves in the fall.

Although maple trees are well-known for the syrup they produce, they have numerous other uses as well, including the making of baseball bats, musical instruments, and furniture.

A very important function of the maple tree is to provide shade from the sun, and its large spread makes it the perfect tree to use for this purpose.

This Florida maple gets to around 49-82 feet in height, which is considered medium- to large-sized for a maple tree. It has light-gray bark, shiny reddish-brown twigs, and leaves that are green with a pale-colored underside. The tree is found as far south as Mississippi, as far west as eastern Texas, and up to Oklahoma, Arkansas, and across to the Carolinas.

Since the wood from the Florida maple tree is hard, it is used for items such as timber, pulpwood, and in the veneer industry, as well as flooring, paneling, and some furniture. It is a very attractive and sturdy type of wood.

The silver, or silverleaf maple, is common in the eastern and central parts of the United States, as well as the southeastern part of Canada. It gets from 36 to 49 feet in height and is usually found in wet areas such as waterways and wetlands, which is the main reason it is sometimes called the water or swamp maple.

The silver maple tree has beautiful five-lobed leaves that often fall off the tree faster than other types of maple leaves. The wood from the silver maple is used for lumber, wood pulp, and in the making of items such as crates and tool handles.

Besides Florida, the Silver Maple is very common all over the United States. Missouri, Alabama, Tennessee are just a few examples.

Also called the soft maple, the red maple has a massive root system and therefore, it is frequently found in large urban areas. The wood is used to make everything from musical instruments to furniture, to name a few, and it makes some tasty maple syrup as well.

This is the most abundant native tree in the eastern part of the United States and can get as tall as 100 feet. It is also a very adaptable tree that can adjust to many different site and soil conditions, meaning it is a very easy-to-grow tree as well as an attractive one.

The sugar maple is a famous tree, and with good reason. Not only is it the tree most often used to make maple syrup, but it is also one of the loveliest trees in the fall. It usually grows to around 115 feet, although some have gotten as large as 150 feet, and it is also known as the rock maple.

The five-lobed leaves of the sugar maple come in bold, bright colors such as yellow, orange, and bright orange-red, and they are also very large at eight inches long. Because of their beauty, sugar maples are often found in public areas such as parks and gardens.

The Chalk maple tree is native to the southeastern part of the United States in Florida, Alabama and North Carolina. It is smaller than many other types of maples, getting only to around 30-feet tall at the most. The reason it is named the Chalk maple is because of its bark, which turns light-gray or chalky white once it matures.