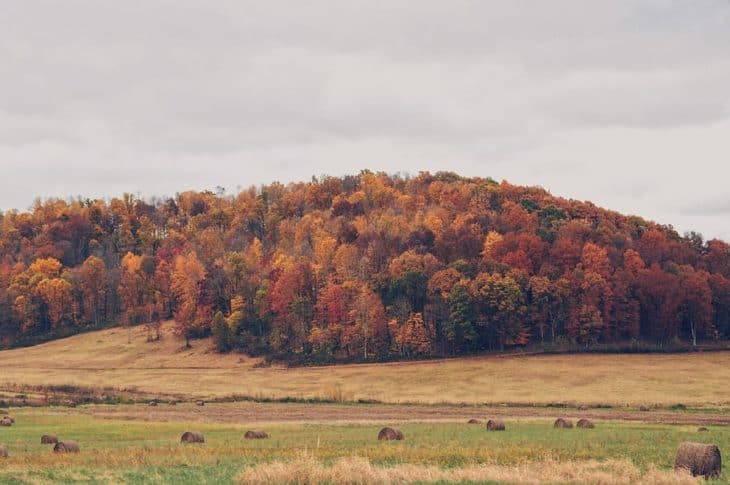 Most of the trees found in the state of Ohio can be broken down into two main types: hardwoods and softwoods. Topping the list of trees in Ohio are trees such as the black birch, red oak, American ash, tulip tree, and the white ash, but there are others to be found as well. Maple is, like all over the US, commonly seen in the state of Ohio as well.

White ash in Ohio is often harvested from the forests and used to make furniture, baseball bats, and firewood; while the Red oak is used in the state to make things such as beams, railroad ties, and flooring.

Each type of tree has its own specialty, even though some – including the American elm – are currently being threatened with diseases and other types of threats.

The state of Ohio has three main types of maple trees, and they are all listed below in detail. If you’re researching maple trees in the state, this is a good starting point to learn more about the marvel known as the maple tree.

The red maple, or soft maple, is the most common maple tree you’ll see when you’re visiting the eastern part of the United States. This tree gets up to a full 100 feet in height and has leaves that come in a lot of different forms. Red maples do a great job of accommodating lots of different site conditions and soil types.

Because it has such a large root system, the red maple tree is often planted in areas that are urban in nature. The wood of the red maple is used to make everything from furniture to a variety of musical instruments, and it is also used to make yummy maple syrup.

Silver maple trees are common in the central and eastern parts of the United States, as well as the southeastern part of Canada. It grows fairly fast and usually gets from 36 to 49 feet in height. It is commonly found around wetlands and waterways, which is why it is so often called the water maple. It is also called the swamp or silverleaf maple tree.

Silver maples have five-lobed leaves and tends to shed those leaves a little earlier than other types of maple trees. In addition, the wood is used as wood pulp, for lumber, and even in the making of crates, tool handles, and many other items.

When making maple syrup, most production companies use the sugar maple tree if it is available. Also called the rock maple, the sugar maple also has some of the most beautiful leaves when the fall season arrives. Sugar maples grow to roughly 115 feet tall but occasionally get to 150 feet in height, making this tree a real head-turner.

The sugar maple leaves are beautiful, five-lobed leaves that usually get to around eight inches in length. Their fall colors include orange, yellow, and a bright orange-red color. Sugar maples are often found in large urban areas and public areas such as parks and gardens. Their eye-catching fall colors will leave you breathless.