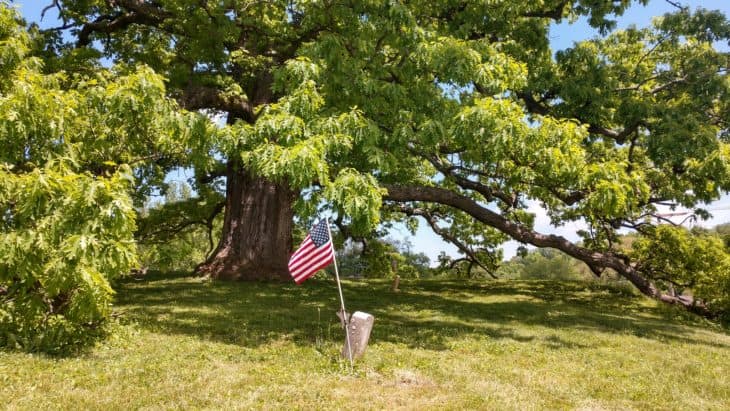 The state of Ohio is home to more than 100 species of trees, and the most common tree in the state is the Virginia pine. But if you want to view a more majestic-looking tree, look for the beautiful oak tree, which dots many landscapes across the state and definitely makes a statement.

Oak trees are very impressive trees that can get quite large and which live for several centuries. There are roughly 600 species of oak trees and they can be found in nearly every state in the country. The nut of the tree is called an acorn and it is encased in a cup-like structure, taking anywhere from six to 18 months to mature. There is also a unique group called the live oak, which gets its name because it doesn’t become dormant during the winter months.

One of the things that makes the oak tree so special is its hard wood, which is why it has so many uses, most notably in the making of furniture, flooring, and in various construction projects. The state of Ohio has a total of eight types of oak trees, and they are all described below.

This tree is actually part of the red oak family and grows to no more than 80 feet in height, which is why it is considered a small oak tree. It is able to grow in both warm and cool climates, but also prefers moist soil. The leaves get four to eight inches long and are a shiny green color on top and a brownish-yellow color underneath. The trunk can get up to 35 inches in diameter, and it has medium-sized acorns that are encased in caps that cover roughly half the nut.

Also called the mossycup oak, the bur (or burr, as it is sometimes spelled) oak tree gets up to nearly 100 feet high, but has been known to get as tall as 160 feet. The leaves are three to six inches long and two to five inches in width, and greenish-yellow flowers are seen in the spring. Regarding the acorns of the bur oak, they are the largest nuts of any of the oak trees, making them very popular with animals such as the American black bear, cattle, deer, and even the porcupine. Bur oaks make great ornamental trees and are often found in public places such as parks and even streets.

Sometimes called the swamp chestnut oak, this tree gets to about 65 feet in height, making it a medium-sized oak tree. The leaves turn a beautiful shade of red in the fall and are very large – up to 11 inches long and 7 inches in width. The wood isn’t terribly useful, but you can find it if you ever purchase a picnic or other type of basket, and the acorns are slightly sweet and therefore popular with cattle and wildlife. It is also commonly seen in public areas such as city streets and parks.

One of the most interesting facts about the chinkapin oak tree is that it can grow in various types of soil, including rocky or sandy terrain. The acorns take only one year to mature and always totally ripen in September or October. Because the acorns are sweet in taste, both wildlife and humans love them, and the wood of the tree is used in many construction projects. The tree also has bark that is flaky and gray in color.

Also called the common or European oak, the English oak tree gets from 13 to 39 feet high and is, therefore, considered a small or medium-sized oak tree. In Great Britain, there is an English oak that has a 40-foot diameter, making it the thickest tree there. In other countries, trees of this type have been found to have lived roughly 1,200 years, so the tree has a long lifespan indeed. Flowering takes place in the spring, and the acorns are roughly one inch in length. The tree also prefers soil that is well-watered, but once the tree matures, it tolerates flooding well. You can see the English oak tree in many public places, including parks, gardens, and lining city streets.

Also known as the Spanish oak, pin oaks get up to 70 feet tall and can have trunks that are three feet in diameter, which means they are considered a medium-sized oak tree. Unlike other oak trees that live for several centuries, the pin oak only lives around 120 years. The wood of the tree is strong and sturdy, and it does well in pollution, which is one of the reasons it is used in numerous outdoor projects, including extensive use by landscaping companies. This is another reason it is commonly found in so many public areas, including streets, parks, and public gardens.

The swamp white oak is a medium-sized tree that grows from 60 to 80 feet in height, and the tallest one on record grew to 95 feet and lived a total of 285 years. The leaves are four to seven inches long and two to four inches wide, and they have five to seven lobes on each side. They also turn brown, yellowish-brown, and even a reddish color in the fall. The acorns mature roughly six months after pollination and get up to one inch long, which is about average size for an acorn. Because it is so easy to transplant, the wood of the swamp white oak is often used in landscaping, and it can be used in various construction projects as well.

Despite its name, the white oak is not actually white but instead is a light gray color. The height and width of this tree can get up to 100 feet, making it quite an impressive tree indeed. Its lifespan averages 300 years; however, in 2016 a white oak tree in New Jersey was found that was roughly 600 years old. In addition to musical instruments and whiskey barrels, the trees are great ornamental and decorative trees, being found in numerous public places.