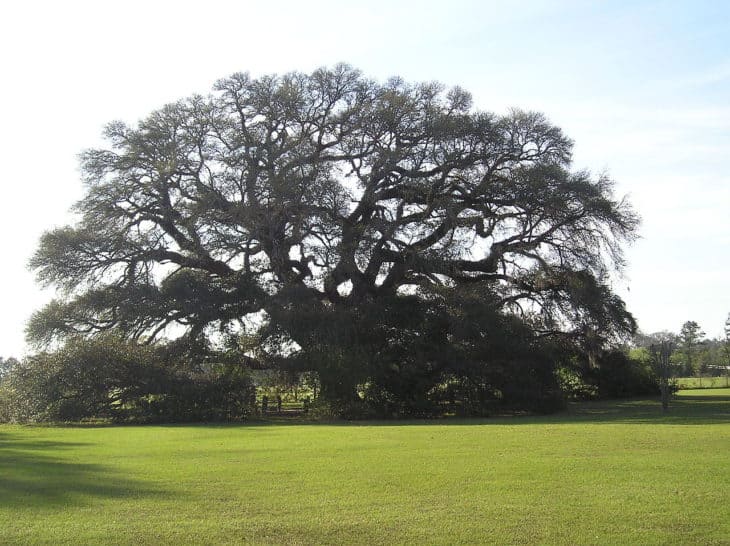 The fact that Alabama has a lot of trees shouldn’t be a surprise to anyone. After all, nearly 70% of the state is covered in forests. Indeed, whether you love pine trees, maples, beeches, or oaks, the weather and the soil are both perfect there to make for some tall, stately trees that offer something for everyone.

If you love oak trees, you’re not alone. These trees are tall and majestic, and they are especially popular within the construction industry because the wood is so strong and reliable. Oak trees live for several centuries and can get up to 100 feet or more in height, and their trunks are often quite massive as well – sometimes getting to around five feet in diameter.

Since the state of Alabama is home to roughly 70 trees per capita, you’ll simply never run out of trees to look at, and oak trees are found all throughout the state, as well as in thousands of landscapes all across the Deep South. There is a total of 23 different types of oak trees in Alabama, and they are described below.

Also called the eastern black oak, this tree grows 65 to 80 feet in height and has a trunk that can get up to 35 inches in diameter. It has beautiful shiny green leaves that are a yellow-brown color underneath, and they are four to eight inches long and are, therefore, elegant looking. The black oak also has acorns that are a little bigger than other oak trees.

The blackjack oak tree is considered a small oak tree because it normally doesn’t grow any taller than 49 feet in height. It is easy to grow, however, being able to thrive in a variety of soils, both good and bad. Since it isn’t as tall as many other oak trees, some people are not that impressed by it; however, its wood is very tough and is often used in BBQ grills and even in wood-burning stoves, among other uses.

This is yet another oak tree that doesn’t get too tall, because the bluejack oak typically only grows to around 33 feet in height. The acorns are small as well, less than an inch in length, but the tree is easy to grow and can grow in numerous soil conditions. Nevertheless, the wood of the bluejack oak typically has very few uses and is mostly used to make fuel and posts.

Typically found in the southeastern part of the United States, the Chapman oak is an extremely small oak tree that normally doesn’t get past about 20 feet in height. In fact, there are Chapman oak shrubs that get much smaller, so it is indeed a very small type of oak tree. Its size keeps it from being used too often, yet it has been known to be used for medicinal purposes thanks to its tannin properties.

This tree is also called the swamp chestnut oak tree and it is part of the white oak group. Its height is typically no more than 65 feet, but its leaves are long and elegant – up to 11 inches long and up to seven inches in width. In the fall, these leaves turn a beautiful shade of red. One of the items made out of the wood of the chestnut oak is a picnic basket, and because the acorns are sweet-tasting, they are loved by wildlife and cattle.

Also called the laurel oak or the laurel-leaf oak, this tree gets to roughly 115 feet tall or less and can have a trunk that gets to five feet in diameter. The acorns take 18 months to mature and are less than one-inch long. The leaves can get up to nearly five inches long and one-and-a-half inches in width, and the tree is often seen growing on hillsides.

Also called the swamp post or the bottomland post oak, this oak tree grows to roughly 80 feet in height. It has a very straight trunk and brown, flaky bark. The leaves can get up to 4.5 inches long and up to three inches wide, and they are shiny and green on top and gray underneath. The acorns of this tree are long and dark-brown in color, and they develop either singly or in threes.

The laurel oak is sometimes called the diamond-leaf or the water oak, and it grows 65 to 80 feet in height. The crown is large and circular in shape, and the leaves can get up to five inches long. Green acorns first grace the tree, but they turn a dark brownish-black color once they mature. It produces a lot of acorns as well, which is why it is so popular with local wildlife.

Because it is so prevalent in the south, this tree is often called the southern live oak tree. It has stiff, leathery leaves that are shiny green on top and pale gray underneath, and they can get up to six inches long and two inches in width. The live oak has a very small acorn that grows either singly or in clusters. Even though the wood of the live oak tree is strong, it is difficult to work with, which is why it isn’t used to make furniture and flooring like the wood of many other oak trees.

The northern red oak tree is native to North America and found mostly in the south-central and southeastern parts of the country. It is also called the champion oak and can get up to 90 feet tall. The trunk can get up to three feet in diameter. With a dark reddish-gray/brown bark and attractive leaves, the latter can get up to nine inches long and up to six inches wide.

Growing to roughly 65 feet in height, the overcup oak is considered a medium-sized oak tree. It can be found mostly in lowland areas and has leaves shaped like lyres. The acorns of the tree are large and are mostly made up of the cap which encases them. The leaves are fairly large, growing up to six inches long and up to four inches wide. They are also a beautiful shade of dark green on the top part of the leaf.

The post oak tree is also called the iron oak, and it is part of the white oak group. It is super easy to grow because it even grows in soils that are less-than-perfect or even poor. It is also considered a small oak tree, rarely getting above 50 feet in height. With leaves that have a unique shape and look a lot like a Maltese cross, their acorns are small and mature in the first summer after pollination.

Also called a runner oak, this tree is a North American species and part of the beech family, like most other oaks are. The tree is both a shrub and a tree, with the former getting up to roughly 39 inches tall. The tree has either gray or dark-brown bark and the leaves are four inches long. In fact, the leaves have a smooth look because they have no lobes or veins on the top. Oddly, they also have a thick layer of hair on the bottom and are reddish-brown in color.

The sand live oak is an evergreen tree that prefers subtropical climates, which is why it does so well in the Deep South. It is considered a small- to medium-sized tree and has very thick bark. It also has thick leathery leaves that get up to 4.5 inches long and small acorns that are oblong in shape. The acorns usually develop in pairs and can consist of many different shapes.

Native to the central and eastern parts of the United States, the scarlet oak tree prefers soils that are dry, sandy, or slightly acidic. It grows 65 to 100 feet in height and is, therefore, considered to be a medium- to large-sized tree. The leaves are big and grow up to seven inches long and up to five inches in width, making them eye-catchers indeed. The acorns are small and mature in roughly 18 months, getting to a pale-brown color once matured.

Getting up to 115 feet in height, the shumard or spotted oak can get a lot bigger in certain parts of the south. One of their most-unique features is the bark, which isn’t rough and scaly like most bark but is instead smooth and reflective. The leaves get up to eight inches long and are green in color – dark green on the top and a lighter shade of green underneath.

The southern red oak is also known as the Spanish oak and is native to the south-central and eastern parts of the United States. They can grow well in numerous soil conditions and normally grow to roughly 100 feet high. The acorns mature at the end of the second season and are noticeable with their orange-brown color. In 2017, this type of tree living in Maryland was found to have a spread that measured more than 102 feet.

Also called the cherrybark oak tree, this tree is a highly valued red oak because it is larger and better formed than other types. It usually gets 100 to 130 feet high and can have a trunk that gets up to five feet in diameter. It is both one of the hardest types of oak trees and one of the fastest-growing oaks. The acorns usually produce large crops and produce every year.

Native to the southeastern part of the United States, the turkey oak is a very small oak tree, getting only to around 33 feet tall at the most. The leaves are especially big – 4 to 12 inches in length. They are also very attractive leaves. If you plant a turkey oak, know that it will still grow well even if you plant it in poor, dry, or rocky soils.

Typically getting up to roughly 100 feet high and up to three feet in diameter, the water oak is part of the red oak group and has acorns that mature in the fall of the second year. They are very small and grow either singly or in pairs. The leaves of the water oak are a beautiful shade of blue-green on both the top and bottom.

You might think the white oak tree has white bark, but you’d be wrong. The bark is actually a light-gray color and is especially attractive. The tree gets up to 100 feet high and 100 feet in diameter, making it quite regal-looking. Used to make whiskey barrels and musical instruments, the white oak makes a perfect decorative tree as well.

The willow oak tree grows 65 to 100 feet in height and has a trunk that is also quite wide – up to five feet in diameter. The leaves are a beautiful shade of green and are 4” x 1” in size. The wood of the tree is hard and grows fast, which is why it is often used as landscaping in public areas such as malls and even parks.