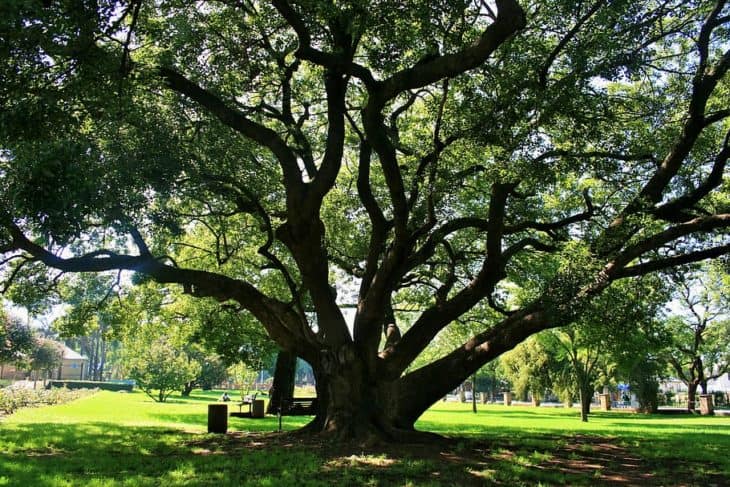 Trees in Oklahoma include everything from elms to black walnuts and pines to dogwoods, and that doesn’t even include the many varieties of the mighty oak found there. In fact, Oklahoma has five main forest types across the state, so you can find just about any tree you want while visiting there.

Oak trees are regal-looking because they are very tall and attractive. One of the most significant characteristics of the oak tree is its wood, which is hard and dense and, therefore, frequently used to make furniture, flooring, and in many construction projects. Some of it is even used to make musical instruments and whiskey barrels, because oak wood is durable and very reliable, not to mention beautiful.

Oak trees can be as short as 35 feet or as tall as 150 feet, although most of them fall somewhere in between. They live 200 to 300 years and have nuts called acorns, some of which are sweet and tasty enough to be enjoyed by humans. Some oaks have leaves that can get up to 12 inches long, and they usually come in bright green and other eye-catching colors.

If you love oak trees, below are some descriptions of the oaks found in the state of Oklahoma.

Blackjack oaks are small trees that normally get to 49 feet high at the most. The trees are easy to grow because they will grow in both good and bad soil conditions. The wood is very tough but since the tree is so small, its uses basically center around wood for BBQ grills and wood-burning stoves. Some people say the blackjack oak is “tough but ugly,” but don’t try to put its wood in your fireplace because it may pop so much that you’ll start a fire.

Also called the mossycup oak, the bur oak is a large deciduous oak tree that is impressive with its height of roughly 160 feet. In fact, even the trunk is massive, often getting up to 10 feet in diameter. Bur oaks grow slow and live 200 to 300 years, although some have lived up to 400 years. The acorns can be two inches long, making them bigger than average acorns, and they are very popular with all types of wildlife.

Chinkapin oak trees are part of the white oak group and grow in numerous types of soils, including soils that are acidic, rocky, or sandy. They have acorns that mature in roughly one year and which ripen usually in September or October. They are usually chestnut brown in color. The chinkapin oak has very hard wood and gray, flaky bark. The wood is used mostly in construction projects, and the acorns are so sweet that they are popular with both wildlife and with humans.

The northern red oak, or red oak as it is sometimes called, is usually found in the south-central and southeastern parts of the United States. It is sometimes called the champion oak and gets to 90 feet tall and up to three feet in diameter. The bark is a dark reddish-gray or brown color and it has massive leaves that get up to nine inches long and six inches wide. Acorns on the northern red oak tree grow either singly or in pairs and mature roughly 18 months after pollination. Green in color but turning a beautiful chestnut-brown once they mature, the acorns are like most other acorns in that they are very small.

Pin oaks are sometimes called Spanish oaks, and they grow to roughly 70 feet tall and up to three feet in diameter, qualifying them as a medium-sized oak tree. They do not live for several centuries like most other oaks but instead, they stick around for about 120 years. The wood of the pin oak is strong and pollution-resistant, which is one of the reasons it is frequently used in outdoor projects that include landscaping for homes and for various commercial and municipal projects as well.

The post oak tree is easy to grow because it will grow in nearly all soil conditions. It is part of the white oak group and is considered small because it rarely gets past 50 feet tall. Some, however, have gotten up to 100 feet. The leaves look like Maltese crosses and, therefore, have a very unique and distinct shape. The acorns of the post oak, which is also called the iron oak, are small and mature in the first summer after pollination occurs. There are nearly 10 varieties and close to 10 hybrids of the post oak tree, and it is often used in urban forestry because of its resistance to decay.

Native to areas such as China, Japan, Korea, and others, the sawtooth oak is similar to the turkey oak and has acorns that mature in about 18 months. The tree can get up to nearly 100 feet high and up to almost 12 feet in diameter. The leaves’ edges look like the edges of a saw, hence the name, and grow up to eight inches long and up to 2.5 inches in width. Acorns get a little more than one inch in length and are bicolored, with an orange color throughout most of the acorn and a greenish-brown tip.

Also called the swamp red oak or the spotted oak, the shumard oak gets up to about 115 feet tall, even though they can get much bigger in some parts of the south. In addition, the bark of this tree is quite unique, being very smooth and reflective instead of flaky and rough like the bark of most other oak trees. The shumard oak has leaves that get up to eight inches long, and they are a beautiful shade of green – the bottom of the leaves is a lighter green than the top.

The southern red oak, or Spanish oak, is native to the south-central and eastern parts of the United States and usually grows up to 100 feet in height. They grow well even in sandy soils and have small, bright orange-brown acorns that typically mature at the end of the second season. Southern red oak trees can get quite massive in size, as proven by one found in 2017 in Maryland that had a spread of more than 100 feet. The tree was also found to be 200 years old.

The white oak tree has bark that is white, correct? Actually, no. The tree’s bark is a light gray color, and the tree itself gets up to 100 feet high. Their trunks can get up to 100 feet in diameter, so they are massive trees indeed. Most white oak trees live up to 300 years, but recently one in New Jersey was recorded to be around 600 years old, so they do live longer than 300 years at times. In addition to being used to make items such as musical instruments and whiskey barrels, the white oak is attractive enough to be used for decorative or ornamental purposes, often lining public streets and included in public parks and gardens.