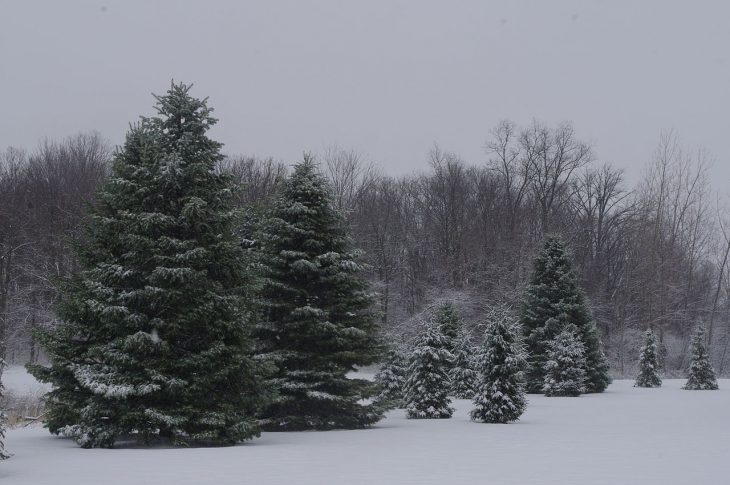 The state of Ohio is home to all sorts of beautiful trees and in fact, its state tree is the Ohio Buckeye. This incredible tree is named for the large brown seeds that resemble the eyes of the white-tailed deer, which is also prevalent in the area.

There are over 100 species of pine trees, including the ones that are commonly found in the state of Ohio. Pine trees are always conifers and evergreens, and they usually grow from 50- to 150-feet tall. The largest one, located in Oregon, got up to more than 260 feet in height.

On average, pine trees can get up to 1,000 years of age, although some varieties can get much older. They have bark that is usually either thick and scaly or thin and flaky. When they grow their new spring shoots, some experts call them candles because of their elegant look.

Pine trees go from seed leaves to the actual needles, which are usually green in color and arranged in groups called fascicles. Most often, there are two to five needles per fascicle. If a shoot is eaten by animals, the fascicles below will grow a new bud that will replace the leaves that were lost.

As far as the cones go, there are both male and female cones on the same tree, each with their own characteristics. Below are some of the most popular types of pine trees in Ohio in today.

Austrian pine trees have thick six-inch needles grouped in twos that are found on densely populated branches and twigs. It does best when grown in zones 3 to 7 and can get up to 60-feet high and up to 40 feet in width. It prefers moist, well-drained soil and full sunlight.

Widely planted in the Midwest and Northeastern sections of the United States, Austrian pines are full in stature and have attractive dark-green needles. They have three-inch brown cones with small prickles on the scales’ backsides. The cones remain on the trees for several years.

Like other Ohio pines, the Austrian pine tree can be affected by certain pests and diseases, including the Diplodia tip blight, which usually starts at the bottom of the tree and affects the tips of the needles and stems first.

At maturity, Austrian pine trees’ shapes can vary from one to another, but most trees keep a pyramid shape or have spreading branches with a flat top.

With three, nine-inch needles per bundle, the Loblolly pine tree grows up to 50-feet high and up to 30-feet wide. It prefers well-drained and slightly acidic soil, and it has a very round attractive shape. It does best when grown in zones 6 to 9 and has a medium growth rate.

The Loblolly pine grows best in the southern areas of Ohio, and its needles range in color from yellow-green to medium-green to dark-green, depending on the season. Although the needles usually grow in groups of three, occasionally they group together in twos.

The needles on this tree remain on the twigs from two to four years, and its uses include pulpwood and lumber. It can be used as borders along roadsides and various properties to control erosion, as well as for ornamental purposes in homes, plantations, and so on.

The Loblolly pine tree is often susceptible to pine beetles, particularly when you plant it in stands. In most areas of the country, this type of pine is used as lumber for construction projects.

Pitlolly pine trees have needles that get from five to six inches in length and grow in bundles of three. It grows best in zones 4 to 7 and gets up to 60-feet high and 40-feet wide. The oval-round shape makes it a very attractive tree, and it prefers soil that is slightly acidic.

Pitlolly pine needles are usually yellowish-green to dark-green in color and grow in abundance, making this tree a very dense, full tree that is a true eye-catcher. The cones are fairly long and have prickles on the backside of the scales.

The bark of this tree is scaly and red when it’s young, but turns to a gray color with a red-brown interior once it’s fully mature. It is a fairly new tree type and, therefore, it hasn’t had a chance yet to be damaged by any diseases or pests.

Needles on the Scotch pine tree are five-inches long and tend to break when you bend them. They grow in groups of two quite prolifically on the branches and twigs of the trees. The needles tend to remain on the twigs from two to four years.

The color of the Scotch pine tree needles ranges from bluish-green to medium-green to yellowish-green, depending on the season and the age of the tree. The needles are also likely to have a slightly twisted shape and look similar in some ways to the needles on the Virginia pine tree.

Though not as common as the Austrian pine tree, the Scotch pine tree can be susceptible to the Diplodia tip blight, which affects the tips of the needles and stems first. These Ohio pines also can be damaged by fungus and pests known as nematodes.

Virginia pine trees have needles that are one and a half to three inches in length and have a twisted shape and a yellow-green to dark-green color. Best when grown in zones 4 to 8, the Virginia pine tree has an irregular and contorted shape, but can get as tall as 40 feet in height.

Also known as the Scrub pine thanks to its often-shaggy look, the Virginia pine tree is commonly found in southeastern Ohio. Once the tree matures, it is usually used for firewood or lumber. In many ways, these Ohio pines are very similar to firs, spruces, hemlocks, and larches.

Virginia pines do best when grown in well-drained soils that are either slightly acidic or have a neutral pH level. These trees are super-easy to grow and, therefore, they are perfect for planting in hillsides, abandoned fields, and even infertile farmlands.

Virginia pine trees are often seen leaning when they are fully mature. The mature cones have prickles on the backside of the scales, just like many other pine trees do.