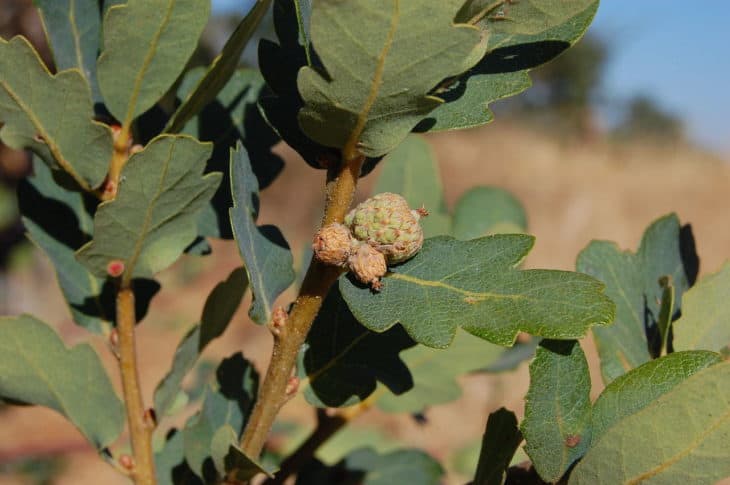 When it comes to forests filled with trees, California has tons of them. In fact, the state has more than 33 million acres of forests, 70 state parks and forests, and a total of 18 national forests, which is more than any other state in the nation.

Although known for the giant redwood trees, there are many other species of trees to catch your attention when you’re there.

The mighty oak tree is something everyone has heard about, and it is a majestic tree indeed. It is tall and stately, and its wood is one of the hardest woods of any trees, which is why it is so often used to make furniture, flooring, and much more.

Oak trees also produce nuts called acorns, most of which are small or medium in size but some of which are very large. Although it is mostly wildlife that feasts on these acorns, Native Americans and others have enjoyed them as well.

Oak trees usually live 200 to 300 years, but a few have lived as long as 600 years. In the south, oak trees are often covered with moss, and if you’re curious about the 10 different types of oak trees found in the state of California, below are descriptions of each.

Also called the eastern black oak, this tree grows 65 to 80 feet high and has a trunk that is usually around 35 inches in diameter. The leaves are four to eight inches in length and are shiny and green on the top and yellowish-brown underneath. The interesting thing about the tree’s acorns is that they are a little larger than those of other oak trees, and the cap usually covers half of the acorn or more. The tree has also been known to hybridize with about a dozen other tree types.

This type of oak tree is found only in the state of California and is its most drought-resistant type of oak tree. Sometimes called the iron or mountain oak, the blue oak is a medium-sized tree that can be as small as 20 feet high or as tall as 66 feet high. Its tough, leathery leaves are blue-green in color, and they can be as long as four inches. The acorns are roughly one inch long and mature in six to seven months. They are also slightly sweet in flavor. The trees always develop flowers at certain times of the year.

This tree is known by many other names besides the canyon live oak, including the canyon cup or maul oak, and it is found in the western part of the United States and into Mexico. At one time, Native Americans consumed the acorns of this tree, but now they are mostly enjoyed by various wildlife.

The tree itself can get 20 to 100 feet in height and has oblong leaves that get to around three inches long and one-and-a-half inches wide. One interesting fact about the tree is that lots of people are actually allergic to its pollen, so pollen season isn’t fun for them!

Also called the California live oak, the coast live oak tree grows mostly in California and Mexico, and it grows from 33 to around 80 feet in height. The trunks can be quite large, getting up to roughly 10 to 13 feet in diameter, making this an impressive tree indeed. The dark-green leaves can be nearly three inches long and 1.5 inches in width, and when the tree stays mostly in the shade they can be thinner and longer. The wood of the tree is mostly used in landscaping and similar uses.

Also called the Pasadena oak, this tree is a small tree that only gets up to roughly 33 feet in height. The bark is thick and a light gray-brown color, and the leaves are leathery and a blue-green color. The leaves can get up to 2.5 inches long and one inch wide, and the acorns mature six to eight months after pollination occurs. As far as the wood is concerned, it is generally strong but often warps or splits when it’s being dried, so it is of little use in the timber industry, or anywhere else for that matter.

This is an evergreen oak found mostly in California, and it grows up to 72 feet in height. Although the leaves look gray from a distance, they are actually dark green and are usually one to two inches long, so they are not a large leaf by any means. The tree has two main purposes: deer are drawn to the beautiful foliage, and humans use the wood as a fuel source. The acorns also mature roughly 18 months after the tree flowers.

Also called the channel island oak, the tree grows up to 66 feet in height and has a reddish-brown trunk and twigs of the same color. The leaves of the tree are very leathery, and they are dark green on top and gray-green underneath. They are usually around four inches long and start out hairy, but lose most of that hair once they mature. Even though the tree was quite common throughout California at one point, the island oak is now found mostly in the island areas. The acorns, or nuts, grow singly or in pairs and are encased in cups that have thick scales and are hairy as well.

This species is found in the Pacific Northwest and has three separate varieties. It is a drought-tolerant tree that is considered medium in size because it only gets to around 30 feet high. There is also a shrub variety that grows to around 16 feet high. It is subject to various pests and diseases, but the fully mature trees are at least fire-resistant. Interestingly, the Oregon oak is a great food source to many animals that are rare or almost extinct, including the western gray squirrel, Lewis woodpecker, slender-billed nuthatch, and the leaf-mining moth, among others.

This is a variation of the Oregon oak, and it is native to California. It can grow in elevations up to around 3,000 feet, and it grows best in USDA growing zones 9b to 10a. The tree’s blooming period is from April to June and it grows best when the pH level of the soil is between 5.3 and 6.8. It also does best in cooler temperatures that don’t get above 48° Fahrenheit. The cup surrounding the acorn is very thick, and the acorns themselves are usually a chestnut-brown color.

Also called the roble tree, the valley oak is endemic to California and is the largest type of oak tree there is. Some of these trees live up to 600 years, and as long as they have access to groundwater all year long, they can grow and thrive. They can get up to 100 feet high and have trunks with diameters of up to 10 feet. Their leaves are two to four inches in length and one to two inches wide. They are matte green on top and a much lighter green underneath. Because the wood cracks sometimes as it’s being dried, it has gone from being a general purpose lumber to basically a niche product.