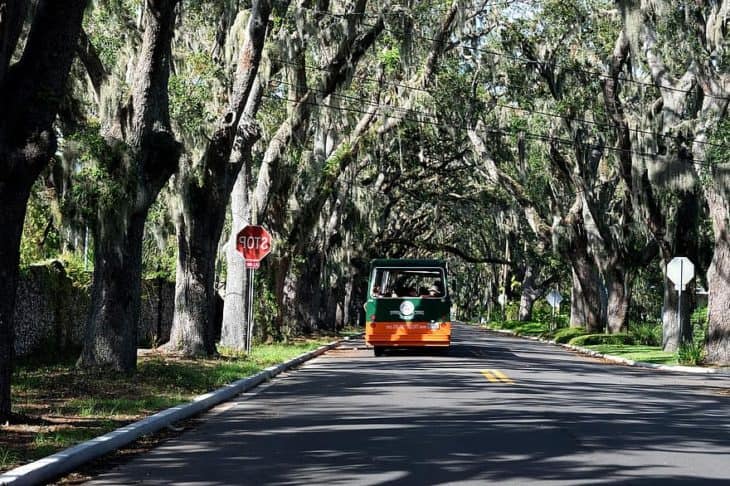 With more than 16 million acres of forests and 180 state parks and forests, Florida is definitely a nature-lover’s paradise. In fact, nearly half of the state is covered in forests, so if you love different types of trees, this is the place to be.

Florida is home to trees such as the birch, walnut, pine, cypress, cedar, palm, and of course, oak trees, among many others. Oak trees grow well in Florida because oaks do well in wet soils and lowland areas, and since 90 species of the oak tree can be found in the United States, you are certain to find lots of them in this part of the country.

Oak trees have unique nuts called acorns, which usually take 6 to 18 months to fully mature. The acorns are eaten by numerous animals, including deer and wild boar. But of course, the oak tree is most valued for its wood, which is thick and strong. This wood is used frequently in furniture but has other uses as well, including furniture, flooring, timber frame buildings, and even in the production of veneer.

If you’re interested in learning more about the 16 types of oak trees found in Florida, keep reading.

Also called the Eastern black oak, this tree can get up to 82 feet high and has a diameter of 35 inches, making it a relatively small tree when compared to other oaks. The tree has been known to hybridize with roughly a dozen types of trees, especially the red oak tree. Occasionally, the black oak has been known to get as high as 180 feet tall. Its leaves are four to eight inches long and are shiny green on one side and a yellowish-brown on the other side.

Also called the cinnamon or sandjack oak, the bluejack oak tree only grows to about 33 feet high and is, therefore, considered a small oak tree. The bark is dark-brown or black in color and the acorns are eaten by several animals, including the Sherman’s fox squirrel. Because it is such a small tree, the wood is normally used only for things such as posts or fuel.

Also called the bastard white oak, the bluff oak tree is found mostly in the southeastern part of the United States and up through the Carolinas. It grows from 45 to 60 feet in height and has a spread of 35 to 50 feet, making it a very impressive tree indeed. It is also an easy-to-grow tree because it is drought-tolerant and grows in acidic, clay, and sand soils.

The Chapman oak is found mostly in Alabama, Florida, Georgia, and South Carolina, and it is a very small tree, especially when compared to other oak trees. The Chapman oak gets only to about 20 feet in height and has leaves that often have no lobes, while at other times the lobes are wavy and very round.

Part of the white oak group, the Chinkapin oak tree is native to central and eastern North America. The tree has flowers that appear from April to late May/early June, and like many other oak trees, the wood is sturdy and strong, which is why it is so commonly used in construction projects. The acorns are eaten by numerous animals, including deer, chipmunks, turkey, squirrels, and various types of birds.

Also called the evergreen oak, this tree does not stay dormant in the winter like many other trees do, which is why it has been given the name “live” oak. These days, the wood is most commonly used to make parts of a boat’s hull, as well as other parts. The live oak has a small size and low-hanging branches, which somewhat limits its commercial use. There is also a type called the southern live oak, which varies somewhat from the regular live oak tree.

The myrtle oak is a species of oaks in the beech family, and it grows up to 40 feet high, which means it is much smaller than most other types of oaks. The tree is native to the southeastern United States and does best in sandy soils and coastal areas. One of its many interesting characteristics is its leaves, which have no teeth or lobes but only veins. The leaves are hairless on the upper side and there is nothing on the underside except veins.

The overcup oak tree is native to the lowland areas of the south-central and eastern parts of the United States, and it is a medium-sized tree that gets to roughly 65 feet in height. The leaves are four to six inches long and two to four inches wide, and they are usually lyre-shaped and dark-green in color, even having fine hair-like structures underneath. The acorns are covered in a cup-like structure, hence the name.

Also known as the iron oak, post oak trees grow slowly and can grow well even in poor soils. Getting only to 30 to 50 feet high, it is smaller than many other oak trees and has acorns that are small and which mature during the very first summer. The leaves of the tree are usually star-shaped and leathery in nature. Some of the uses for its wood include flooring, railroad ties, and even fence posts.

Also called a swamp red oak, the Shumard oak can get up to 115 feet in height and is a very sturdy tree. The large, one-inch-long acorns provide food for birds, waterfowl, and deer, and the tree’s bark is smooth and very reflective, making it very unique indeed. In some instances, the Shumard oak tree has grown to 200 feet in height, although this is not an average size.

Also known as the Spanish oak tree, this oak tree is a large tree that gets up to nearly 100 feet high and which can have trunks with diameters of up to five feet. The leaves of the red oak are quite large, up to 12 inches long and six inches wide, and the bright orange-brown acorns are small, normally just a little more than half an inch. It has occasionally been known to hybridize with other trees, usually other red oaks.

Part of the white oak family, the swamp chestnut oak tree usually grows to roughly 65 feet high, but has been known to get as high as 150 feet. The leaves of the tree are usually 4 to 11 inches in length and two to seven inches in width. In the fall, they turn a beautiful red color, and the acorn is roughly 1.5 inches long and quite large. These trees are often used to line public streets because of their beauty, and the acorns are only produced every few years, although they do produce many of them at the same time.

A type of red oak, the turkey oak tree typically gets no higher than 33 feet tall, but can occasionally get up to 90 feet. The leaves are unique in that they can be as short as three inches long or as large as 12 inches in length. They are also very attractive leaves and interesting to look at. Another interesting characteristic is their ability to grow in numerous conditions, including difficult conditions such as dry, sandy, or rocky soils.

Part of the red oak group, the water oak is native to the eastern and south-central areas of the United States, and it is considered a medium-sized tree at roughly 100 feet high. The trunk gets to roughly three feet in diameter, and the leaves are one to five inches long and up to two inches in width. They are beautiful blue-green leaves that attract attention, and the acorns sometimes grow in pairs. The wood is used mostly as fuel and timber.

Although it is called the white oak, the color of most of these trees is usually a light gray. Some specimens of the tree have been known to live to be 450 years old, and it usually gets from 80 to 100 feet high. The leaves of the tree are large, usually five to eight inches long and three to four and a half inches in width, and they can turn a variety of colors in the fall, including red and even purple. White oak trees have one-inch-long acorns that usually fall off the tree in early October.

Part of the red oak group, the willow oak tree usually gets 65 to 100 feet tall, although some have reached heights of close to 130 feet. The trunk gets 40 to 60 feet in diameter, and the leaves are unique because they are shaped just like the leaves of the willow tree, getting to nearly five inches in length and one inch in width. The acorns are small, roughly half-an-inch in length, and they are eaten by squirrels and other wildlife. The trees also grow relatively fast – up to two feet per year.