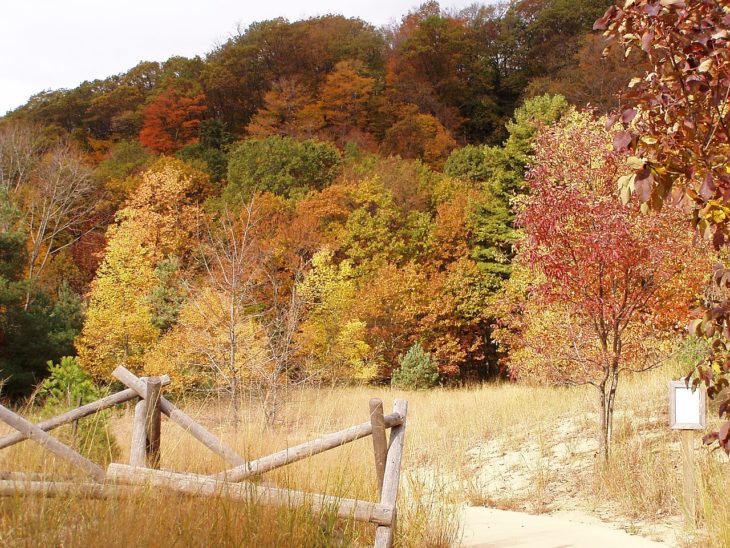 If you visit Michigan in the fall, you’ll see a bevy of colorful leaves, and many of those are leaves from the many maple trees in the state. Michigan is a heavily forested state and, therefore, you’ll never get tired of looking at the many beautiful trees it has to offer. Let’s take a look at the types of maple trees in Michigan.

There are more than 125 species of maple trees, and most are native to Asia. With easily recognizable palmate leaves and winged fruits that have a very distinctive look, it is easy to understand why maple trees are so popular with people in Michigan and elsewhere.

Maple trees have numerous commercial uses, including being tapped for sap, as an ingredient in syrup or taffy, and in making everything from bowling pins to baseball bats and butchers’ blocks to archery bows. Sugar maple trees produce the hardest type of maple wood.

Maple wood is also used to make musical instruments, furniture, and pulpwood, to name a few. People also love these maple tree types in the fall because of their brightly colored leaves. In many ways, you simply can’t ignore a maple tree thanks to its beauty and its usefulness.

Michigan is home to a lot of different trees, and although their state tree is the Eastern White Pine, the state has a lot of beautiful trees that are native to the area. These include balsams, firs, pines, and cedars, and there are all types of each of those.

In the forests of Michigan, the most common trees include the sugar maple, beech, yellow birch, hardwood, northern white cedar, and red pine; however, there are numerous other types in the state that include sumac, hazelnut, willow, elm, mulberry, oak, and cypress, to name a few.

Maple trees are quite common in the state, and if you’d like more information about the three types there, keep reading because below is a description of all three of them.

Although there are dozens of species of maple trees, some are more common than others in the state of Michigan, and following are a few of them.

One of the most common types of maple trees in the state, sugar maples have beautiful red, orange, and yellow leaves that show off their gorgeous color during the fall months. It is a majestic tree with an amazing stature and gets up to 75-feet tall in many locations.

Also called the rock maple, the sugar maple is known for two significant achievements: it is the main tree used to produce maple syrup, and its leaves are always some of the brightest during the fall season. They can grow to 115-feet tall, although some have grown to nearly 150-feet, making this an extraordinary-looking tree indeed.

Its 8-inch-long leaves have five lobes and the fall colors can range from yellow to orange to bright orange-red. The sugar maple tree is commonly planted in public and urban areas since it is easy to grow, attractive, and is large enough to grow successfully in parks and other big areas.

Best when grown in zones 3-8, sugar maple varieties include Commemoration, Green Mountain, and Legacy, all of which have an abundance of warm yellow and orange leaves that stand out among the rest. Sugar maple trees certainly make a statement.

A gorgeous maple tree that you’ll find on any drive through the country, sugar maple trees are some of the most popular and well-loved trees in the state, and they look great in both personal and commercial landscapes.

Red maple trees grow best in zones 3 to 9 and are found throughout the state of Michigan. If you choose to grow this type of tree yourself, you’ll do best to remember that it needs a lot of watering until it is established in the soil.

Red maple trees do well in all seasons in the state, and its pink-tinged flowers come out shortly during the spring. They grow to roughly 40 to 60 feet in height and display colors such as gold, orange, and red in the fall. Types such as October Glory are especially attractive.

The trees are also neat-looking, attractive trees that are found in both home landscapes and in city streets. They typically do best in lowlands where there is easy access to water, and they make a grand statement wherever they’re planted.

The red maple is also called the soft maple, and it is the most abundant native tree in the eastern part of the United States. When the tree is fully grown, it can be as high as 100 feet, and its leaves come in many different forms. In addition, the red maple is a very adaptable tree, able to adjust to many different soils and site conditions.

Because of its massive root system, the red maple does very well in urban areas, and its uses include furniture, musical instruments, and the veneer industry, as well as for the production of maple syrup.

These trees get their names due to the silver color that is underneath the leaves. They grow quite fast and have massive spreads and, therefore, should only be planted in areas where there is a lot of room for them to grow. They get up to 70-feet tall and up to 45-feet wide.

Also called the silverleaf, water, or swamp maple, this tree is found mostly in the eastern and central parts of the United States and the southeastern part of Canada. It is a deciduous tree that grows fairly fast and usually gets from 36- to 49-feet high. You can find them near water areas such as waterways and wetlands, which is the reason they are often called the water maple.

The silver maple has simple leaves with five lobes, and in the fall, it tends to shed its leaves a little earlier than other maple trees. Uses include lumber, pulp to make paper, and even crates and tool handles.

With a shallow root system, these maple tree types are almost seductive to look at, and they certainly make a statement in anyone’s front or back yard. Also known as creek maple or water maple trees, they are not only a common maple tree in Michigan, but in the rest of the country as well.

The silver maple leaves are usually three to six inches long and two to five inches in width. Compared to other types of maple trees, the silver maple tree drops its leaves fairly early in the season. Interestingly, they can even change sex from one year to the next.

Black maple trees are close to sugar maples in many ways, but most people consider them a subspecies of the sugars. Both of these maple tree types often form hybrids, but the best way to tell the difference is to look at the leaves.

The leaves of the black maple tree are three-lobed, whereas sugar maple trees have five-lobed leaves. Black maple trees also have darker leaves with a much droopier look, as well as smaller seeds and bark that has much deeper grooves.

Black maple trees have many different important uses, which include the production of maple syrup and as timber for landscaping and other purposes. It is a very hard wood type and is used as timber in many different products.

Also known as moosewood or goosefoot maple, the striped maple tree is a small species of maple tree that only gets up to around 33-feet high, which is smaller than many other types of maple trees. The trunk only gets around eight inches in diameter, and it blooms in late spring.

The striped maple tree has leaves that get up to six inches long and up to four and a half inches in width. They have three lobes that are pointed at the tips. The bark starts out with green-and-white stripes, but turns more of a brown color as it matures.

The striped maple tree prefers habitats such as forests and sloped areas, and it is a shade-tolerant deciduous tree that wildlife loves, especially moose, beavers, and rabbits, who eat the bark during the winter months.

Also known as Palmate maple or Red Emperor maple trees, these trees have attractive forms, leaves, and leaf colors. They get up to roughly 30 feet in height and include three subspecies. Native to Japan and other Asian countries, the Japanese maple tree has many different uses.

Japanese maple leaves can get from one and a half to five inches in length and can have up to nine lobes. Like many other maple tree types, the trees can grow in a variety of elevations. If they are grown in hot climates, they prefer to be in partial shade to thrive.

If you’ve ever seen ornamental or fully-grown bonsai trees, it is very likely they were Japanese maple trees. They have been known to successfully grow in both the ground and in containers.