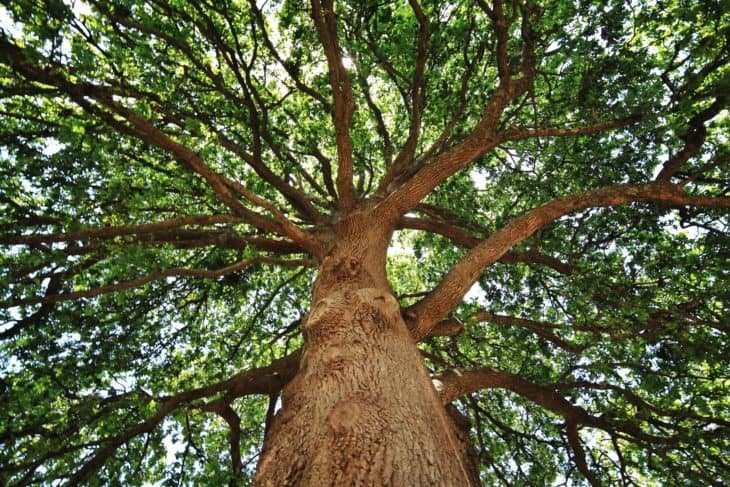 The majestic oak tree is written about in novels and displayed across the screen in hundreds of movies, and there is little wonder why. Not only is the tree strong and beautiful, but it can live up to 150 years or longer. This makes it a true asset to any landscape.

Oak trees are part of the beech family, and there are roughly 600 species around the world. In the state of Michigan, oak trees are just one of the many types of trees, and since more than half of the state is covered in forested land, you can find plenty of them there. In fact, the state has 28 state forests and three national forests, giving it plenty of opportunity to brag about its many tree types.

One of the most significant advantages of the oak tree is the sturdiness of its wood. The wood is very thick and hard, making it perfect for creating furniture, building houses, and even in flooring. It is also very commonly used to make barrels that hold various types of alcohol, including whiskey, brandy, sherry, and many types of wine.

There are six types of oak trees found in Michigan, and they are described below.

Oddly enough, black oak is part of the red oak family, and the tree itself is considered one of the smaller types of oak trees. It grows only to about 80 feet high and 35 inches in diameter, and it frequently hybridizes with other trees – at least a dozen that we know of. It prefers moist soil and can grow in both warm and cool climates.

The black oak tree has leaves that are four to eight inches long and are shiny dark green on the top and a brownish-yellow color underneath. The acorns are medium-sized and have caps that cover half of the nut.

Bur oak trees usually get up to around 100 feet in height, but they have been known to grow to 160 feet instead. It is also common for this type of tree to get to be 400 years old, although the most common age is 200 to 300 years. It is one of the slowest growing types of oak trees and has bark that is gray in color and very rugged.

The significant trait of the bur oak is its acorns, which are larger than any other type of oak tree. They are so popular with wildlife that American black bears will tear off the limbs of the tree to get to them.

Native to North America, the northern red oak is sometimes called the champion oak, and it usually grows to roughly 90 feet tall and 20 to 39 inches in diameter. It is a fast-growing tree, getting up to 20 feet tall in just 10 years. The tree can live for up to 400 years and is tolerant of many types of soils.

When it comes to the production of timber, few trees are more valuable than the northern red oak. It is used for flooring, furniture, and interior trim, although not for exterior trim because it is subject to water infiltration.

Also called the swamp Spanish oak, the pin oak is considered a medium-sized tree and gets to roughly 60 to 70 feet tall and three feet in diameter. The leaves are roughly six inches long and nearly five inches wide, and the tree itself doesn’t live quite as long as other oak trees – usually only around 120 years as compared to the several centuries that other oaks tend to live. Its wood is very popular in landscaping, mainly due to its tolerance to pollution.

The swamp white oak is considered a medium-sized tree because it only grows 60 to 80 feet in height. The leaves can get up to seven inches long and a little more than four inches wide, and they turn brown, yellow-brown, and sometimes a reddish color in the fall. The acorns get up to around 3/4 inch long, and the tree is a lowland tree that is often found in places such as the margins of lakes and ponds, as well as low-lying fields and broad stream valleys, among others.

Although it is called the white oak, its bark is usually a light gray color. It grows 80 to 100 feet high and is sometimes as wide as it is high. It usually lives for 200 to 300 years, although a white oak tree found in New Jersey was estimated to be 600 years old when it died in 2016. White oak trees have many uses, including being an excellent ornamental and decorative tree, although you cannot successfully plant them in urban settings due to their aversion to both pollution and road salt. The wood is used to make barrels for aging wine, musical instruments such as banjos, and even some martial arts weapons.