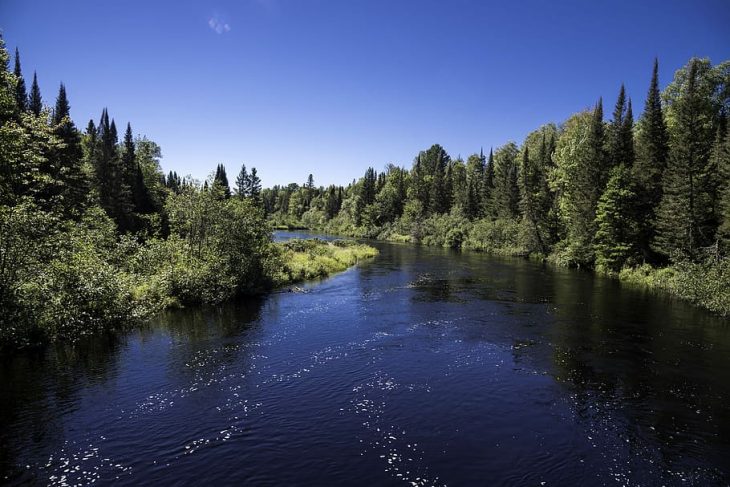 Michigan is home to many different types of pine trees and in fact, its state tree is the White Pine! The state has the perfect weather to grow pines and other conifers, so if you love pine trees, this is the place to be.

Types of pine trees in Michigan:

The state of Michigan is home to three main types of conifers: pine, spruce, and fir trees. All are evergreen trees, which is one reason a lot of homeowners get them confused. But the good news is that you don’t have to be an expert to tell them apart.

You can also look at the cones to determine what kind they are. Pine cone scales are woody, while spruce cones have thinner and more flexible scales. Pine and spruce trees have cones hanging down, while fir cones stand up straight on the branch.

If you wish to learn about different pine tree types growing in Michigan, read on.

Also called the Northern Pine, Soft Pine, or Weymouth Pine, this pine tree is the tallest conifer in the Northeast section of the United States. It can grow up to 100 feet in most cases, getting up to 150 feet at other times. The trunk is also large and gets two to four feet in diameter.

Although no one knows for sure, white pines grow to be roughly 200 years old; some think they can get to be 450 years in age. They are also rapid growers and can get up to 40 feet in just 20 years. Some experts believe it got taller in the past before extensive logging became the norm.

The tree has smooth gray bark when it’s young, breaking into small plates when it starts to mature. It also has a very deep root system, as they get to roughly 40 inches below the ground. The needles are three to five inches long, dark-green in color, and bundled in groups of five.

The needles on this tree are soft, fine, and very flexible, at least until the second year of growth. Starting at around 5 to 10 years of age, cones begin to develop and are four to eight inches in length and spine-free. For the cones to fully mature takes approximately two years.

Although Eastern White Pines grow well in most soils, they prefer soils with a pH balance of 4.0 to 6.5. To survive well, the trees need an annual rainfall of between 20 and 80 inches, and a 90-day frost-free period is required. They should also be grown in areas that stay above -33ᵒ Fahrenheit.

Like other pine tree types, the Eastern White Pine is very versatile. Because of their tall, straight trunk, they were once used in ship masts. Today, the wood is used for everything from trim to Christmas tree products and doors to paneling. It has medium strength and is easy to work with.

White Pines also have edible seeds and have been used in strip mines to stabilize the soil. They are not drought-resistant and can be ruined by certain pests, including the white pine weevil and the white pine blister rust, which can cause it a lot of damage.

Also called the Norway Pine or the Pin Rouge, the Red Pine tree grows to roughly 80 feet in height, although in some areas it can grow to 100 feet tall. The trunk usually has a diameter of two to three feet, but the largest one recorded got to nearly 70 feet in diameter.

The twigs and branches of the Red Pine tree start out as a yellowish-brown color, but turn more of a reddish orange-brown as it ages. New whorls of branches are produced each year, and the bark has a diamond, crisscrossed pattern to it.

The needles of the Red Pine tree are stiff, almost brittle, and dark-green in color. Before they fall off, the needles stay on the branches from three to six years. Needles grow in bundles of two and can be either a twisted shape or very straight.

Like other pine tree types, the Red Pine prefers well-drained soil and doesn’t like overly dry climates. Although they are commonly found in areas of 700 to 1,400 feet, they have been known to grow well in areas that are at 4,000-foot elevations.

Red Pine offers a hard, straight-grained wood that is used for railroad ties, cabin logs, veneer, and posts and pilings. It was used as a Christmas tree at one point and is even used in landscaping in various parks and recreation areas around the country.

As far as pests and diseases go, the Red Pine tree is susceptible to more than 200 insect pests, the most common of which are the red pine cone moth, Jack pine budworm, white pine weevil, and the red pine cone worm, among others.

Interestingly, both male and female cones can be found on the Red Pine tree, with the females found at the top of the tree and the males near the bottom. The male cones are small and dark-red in color; the female cones are ovoid to conical in shape and no more than two and a half inches in length.

The seeds in the Red Pine cones are a purplish-brown color and can actually last for up to 30 years if you keep them dry and cool, meaning between 30ᵒ and 40ᵒ Fahrenheit.

The roots on the Red Pine are lateral and found just under the surface, but there are vertical sinkers found as low as 20 feet under the ground. They often have taproot as well, although it rarely grows longer than 10 feet.