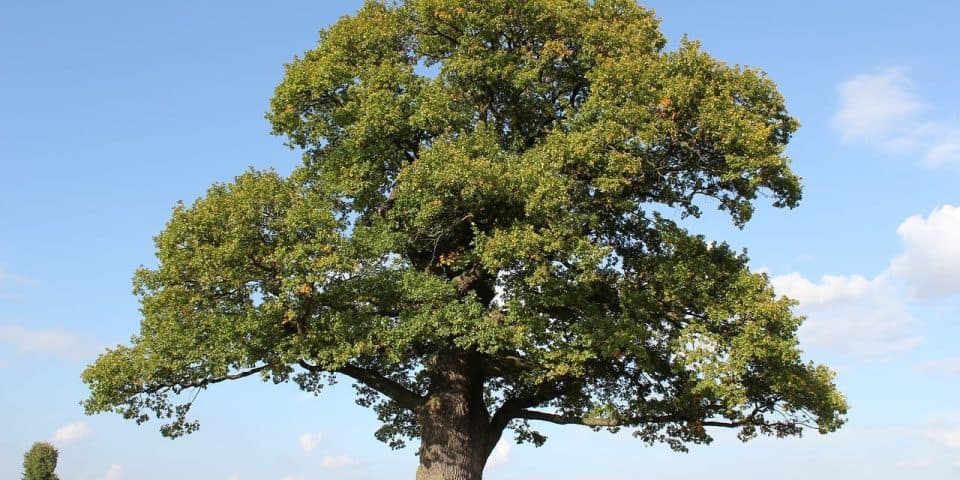 Hardwood trees are usually sought after by those who wish to make strong, sturdy furniture and other items so it helps to know which trees belong in this category. It can be difficult to tell the difference between hardwoods and softwoods but there are ways to make this easy to do.

Hardwoods differ from softwoods because they have more wood cells and less per-square-inch air than softwood trees. The differences between these two types are mostly botanical and not necessarily based on how hard the wood is. Hardwoods belong to the angiosperm class while softwoods fall under the gymnosperm class.

Hardwood trees have seeds encased in an ovary, such as apples from apple trees. Softwoods usually have needles and are evergreens whereas hardwoods are deciduous and have broad leaves. An apple tree is a hardwood type as are shade trees such as oak and maple, fruit trees such as peach and cherry, and some shrubs.

In addition, some hardwoods, such as the balsa tree, are quite soft while some softwoods, such as pine trees, are fairly hard. This is why you often have to look at the botanical classification instead of the hardness level of the tree to determine its true type.

Below are 20 types of hardwood trees for you to learn more about.

Ash trees are mostly deciduous and are medium to large in size. They grow in the spring through the early summer months and contain seeds that are called helicopter seeds or keys. Their fruit is called a samara and the two most common types include green and white ash.

Other less-common types of ash include black, Carolina, and blush ash.

The ash tree has bark that is gray and furrowed and fruit that resembles a single winged key and hangs in clusters. Because of the emerald ash borer, or EAB, both green and white ash trees are becoming less and less common.

Beech trees are slow-growing trees that are deciduous and can grow to be 300 to 400 years old. They can reach 50 to 80 feet in height and are now found mostly in the eastern United States, although at one time they were found in other places as well.

With light gray bark and a tight, smooth appearance, the beech tree is quite attractive. It is commonly found in cemeteries, school campuses, parks, and landscapes that are quite large.

The beechnut is edible and feeds various wildlife. The tree has dark green leaves and very smooth bark. It can grow in altitudes up to roughly 3300 feet. If you find initials carved into a tree, it is likely to be a beech tree!

Another hardwood type is the birch tree, which is small or medium in size and can consist of large shrubs. Found mostly in northern temperate climates in areas such as Europe and North America, birch trees have leaves that are serrated and fruit called samaras.

In North America, there are four main types of birch trees, which include:

The trees’ berry-like fruits are almost one inch in diameter and turn a dark black-purple when ripe. However, you cannot eat the seeds, leaves, or bark of the tree because they are toxic.

Black walnut trees consist of 21 different species and include the black walnut, butternut, Arizona walnut, and two different species in the state of California. They prefer riparian zones around creeks, rivers, and dense woods and they do best in areas with a lot of sun.

Black walnut trees often release chemicals in the soil that can kill other plants, which is why you often see dead or yellowing plants near the trees.

These are deciduous trees that include large, hard-shelled nuts and leaves that are either toothed or serrated. Their bark is usually dark in color and the nuts range from round to oval in shape, depending on the specific species.

Cottonwood trees get their name because of seeds that are covered in a fluffy white covering. They like wet conditions because they are sturdy enough to withstand the elements. The most common types of cottonwood trees are Eastern, black, and Fremont cottonwoods.

Cottonwood trees normally have yellowish-green bark and leaves that are triangular in shape. Their flowers and fruits vary from one type to another but the mature trees always have deeply furrowed bark.

Common uses for cottonwoods include storage boxes, paper, and plywood.

Elms are deciduous and semi-deciduous and include American, slippery, and rock elm trees. They have asymmetrical, toothed leaves and fruit that is either a winged key or a drupe, including plums, cherries, and almonds.

American elms are perhaps the most popular type of shade tree in existence today. They are popular in part because of their vase shape and their elegant arching leaves. These trees can get up to 100 feet in height and 120 feet in width so they are quite large.

With nearly 20 different species and extra-large nuts, hickory trees can be found in the United States, Mexico, China, and Indochina. They include the shagbark, pecan, and pignut groups and they have tasty, nutritious nuts covered in a very hard shell.

Perfect for growing in zones 4-9, hickory trees have bark that is shaggy and gray in color. Their fruits drop in late summer and early fall and their leaves can get up to a healthy 8 to 14 inches in length.

Some types of hickory trees can grow up to 100 feet tall and 75 feet in width, making them a large, sprawling tree that is quite eye-catching.

If you own a hardwood type of tree with pointed, sharp-spine leaves and red berries, you have a holly tree in your possession. Holly trees are a type of oak tree and include more than 450 species, consisting of shrubs, climbers, and evergreen or deciduous trees.

Some types of holly trees grow up to 82 feet tall. They can grow well at sea level and up to around 6600 feet in elevation, making them a very versatile tree. They have glossy leaves and bright-red berries, making them the perfect accompaniment to Christmas decorations in the winter months.

Another hardwood type of tree is the magnolia tree, which consists of large, dark green leaves and beautiful white or off-white blooms that are very aromatic and eye-catching. The aroma is most noticeable in the early summer months.

Even the twigs on the magnolia tree smell nice and its fruit consists of a cone-like aggregate shape. They are very common sights in the southeastern section of the United States.

With roughly 125 different species, maple trees are in a family of their own. They include types such as the black, mountain, chalk, canyon, striped, and Rocky Mountain maple trees. Their deciduous leaves are found on stems that are opposite each other and their leafstalks are very long.

Maple trees have small, showy flowers that form in clusters and fruit that develops in early spring. In particular, the red maple is noticeable because it has red stems and red buds to catch people’s attention.

Oak trees consist of roughly 76 types in North America and 400 species worldwide and are an especially hard type of wood. Thanks to their acorns, oak trees provide sustenance to wildlife of all types. They can live for hundreds of years and get up to 100 feet in height.

The oak tree has flowers that fall in late spring and acorns that take 6 to 18 months to fully mature. They can be divided into two main categories — white and red oaks — which you can see in the hue of the wood when it’s cut.

Poplar trees do not include the yellow poplar because this is not a true poplar tree.

Red alders are deciduous trees that are native to the western United States. This is the largest species of alder trees and has bark that is bruised or scraped and that is often reddish-brown in color, which gives it its name.

Red alders can get quite tall, with the tallest one found in Oregon and reaching a whopping 105 feet. The leaves can get to six inches in length and their cone-like dry fruit gets to roughly one inch in length. Red alder is used in dyes, to treat skin problems such as poison ivy, and in furniture and cabinetry.

Sassafras trees are aromatic and have been touted as cures for numerous ailments when made into a tea. Although these claims are over-exaggerated, the tree still smells great and makes a great form of sustenance for wildlife.

Parts of the sassafras tree can be used for everything from thickening soups to making items such as buckets and furniture. It can even be used to restore depleted soils in fields that have been neglected.

Sweetgum trees have 15 different species and are deciduous trees used both for ornamental reasons and in the wood industry. They can get up to 130 feet in height and have leaves that are orange, yellow, or bright red in color, which makes them very striking trees. Its fruit is frequently called a gumball and gets to roughly one and a half inches in diameter.

Sweetgum trees also smell great and have leaves that are especially eye-catching in the fall.

The sycamore is a hardwood type of tree that can be found in central Europe, southwest Asia, Australia, and North America, in particular the southwestern part of the United States. This is a large tree that often gets up to 110 feet in height with a trunk of three feet in diameter.

Sycamores have leaves that can be nearly 10 inches long and the leaves get gold or reddish-orange in the fall. The trees’ uses include material for butcher blocks and as sustenance for various wildlife.

Also called Pepperidge trees, tupelo trees contain only around 10 species total. They can be found in parts of North America, mainland China, and eastern Tibet. Their seed capsules are dispersed among wetlands and waterways and the tree is highly tolerant of flooding and wet soils.

One type, the water tupelo, is found mostly in the coastal plain from Texas to Virginia. They even produce a mild-flavored honey that is used by people living in the southeastern part of the United States.

Also called the black willow because of its dark gray-brown bark, the willow tree is quite large and one of the first trees to bloom in the spring. Uses include millwork, doors, boxes, and barrels and there are roughly 90 species of the tree in existence today.

Willow trees grow fast but don’t usually last very long. They are mostly found in the coastal states of the United States near watercourses and floodplains.

The yellow poplar tree is not a true poplar and is also called a tulip tree or tulip poplar. Although it grows quickly, the yellow poplar doesn’t have the short lifespan that other fast-growing species do and it is a very strong type of tree.

Yellow poplars have pale green or yellow flowers with orange bands on the sepals and they produce large amounts of sweet nectar.