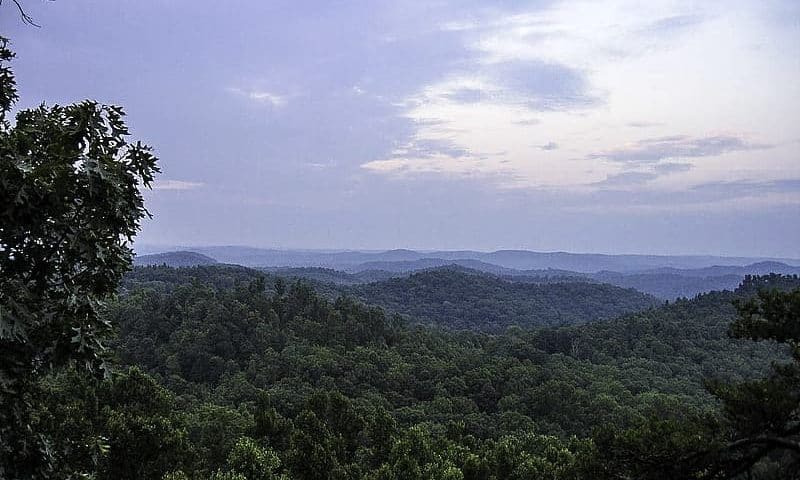 Kentucky is known as the blue grass state and indeed, some of the grass is such a deep shade of green that it does have a blue tint to it. But the state offers much more than this, and if you love the outdoors, not to mention activities such as horse-racing, this is the place to be.

Kentucky is home to more than 12 million acres of forests, with most of them consisting of oaks and hickory trees. Trees dot the landscape practically everywhere you go, especially because there are more than 50 state parks housed there. The most common tree in the state is the red maple, but if you love pine trees, you can find those there as well.

The Eastern white pine is also known as the soft or Weymouth pine, and it can get to nearly 190 feet in height, sometimes even higher. This is, in fact, the tallest tree in the eastern part of North America and can even get up to five feet in diameter. Interestingly, their needles have more vitamin C than lemons or oranges, and there are other parts of the tree that are valuable as well.

The wood of the Eastern white pine is used to make ship masts and for lumber in the construction industry. When the bark and sap are used, the tree is also good for medicinal uses.

The pitch pine tree can get up to 100 feet high but has twisted, almost misshapen branches and trunk; therefore, it cannot self-prune. Because of their stature, the wood is seldom used commercially, although it has been used to make railroad ties and even ships. The bark of the tree has been used medicinally by many Native American tribes, who used it to treat cuts, burns, and rheumatism, among other things.

The tree is also used to provide nourishment for animals such as deer, birds, and squirrels, who eat not just the seeds, but other parts of the tree as well.

Virginia pines are also called scrub pines or Jersey pines, and they can be found throughout the eastern part of the country. Uses include wood pulp, lumber, and even reforestation, and it is known for its needles, which are very short and grow in a twisted pattern. Some of its many other uses include mine timbers, lumber, pulp to make paper, railroad ties, and even for tar and fuel.

The Virginia pine also has flexible, bendable branches and reddish-brown bark. In fact, the bark has been used extensively in Native American culture for medicinal purposes, being used to treat everything from fever to diarrhea and even tuberculosis and constipation.

Native to the eastern part of the United States, the yellow pine is often used for wood pulp, veneer, and lumber. It has needle-like leaves that grow in groups of two or three, and they can be either straight or crooked in shape.

There is sometimes confusion when it comes to the name, because “yellow pine” can refer to different types of pine depending on what part of the country you’re in.

In the southern part of the country, yellow pine usually refers to either longleaf, shortleaf, or even loblolly pine, and the wood from the tree is used in everything from construction to utility poles.

Even though you won’t hear the name Yellow Pine very often around North America, the latin name Pinus echinata is actually common in states from Texas to Virginia to Pennsylvania, and, of course, Kentucky.