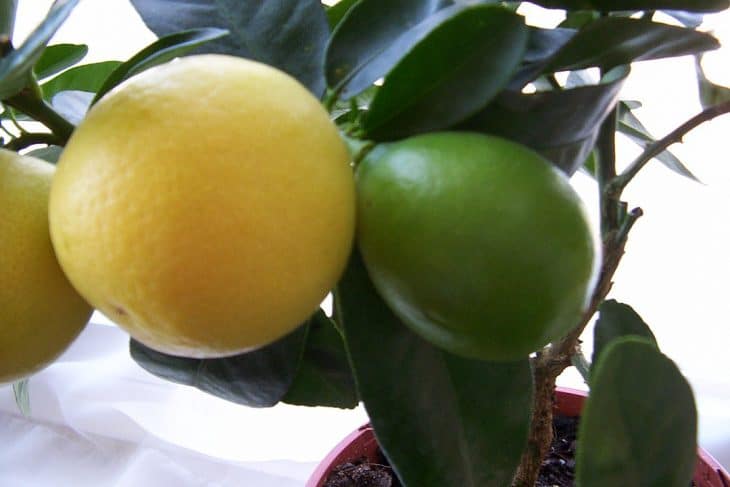 Limes have been around for a long time and were once used to ward off scurvy. Nowadays, no one has to worry about scurvy, but limes are still used in the kitchen, to enhance certain alcoholic drinks and for making key lime pie. Lime trees are especially easy to grow in hot climates.

Limes are boldly flavored citrus fruits that are usually very sour, which is why they are usually used as an ingredient in various foods and drinks. They can be grown in the garden or in containers as ornamental trees, and they can only be grown outdoors year-round when temperatures are warm.

Lime trees are usually easy to grow, and contrary to what some people believe, they can vary in color and hue. Not all limes are green, in other words. These are compact and very attractive trees with fruits that can even be used in many nonfood products.

There is more than just one lime tree type, and each one offers its own advantages and fresh taste. Without exception, places that get below freezing usually aren’t conducive to the growing of lime trees, but if you live in a subtropical climate, you’ll find growing them very simple.

Below are some of the most popular types of lime trees.

An evergreen tree that gets up to roughly 20 feet high, the key lime tree does best when grown in zones 9-11. They usually live for around 150 years and have beautiful glossy leaves that are either oblong or elliptical in shape. Some of these trees have thorns, though this doesn’t apply to all of them.

Key lime trees have two-inch white flowers that bloom in the spring and limes that are yellow-green in color. The limes get up to three inches in diameter and have greenish flesh that is very juicy and filled with seeds. They fruit mostly during the winter months.

In addition, key lime trees are attractive trees with smooth, dark bark, and if you’re looking for a great shade tree, this is it.

This is a tree that absolutely thrives when grown in zones 9-11, and most experts believe it is a hybrid of the Mexican (key) lime tree and either the lemon or citron tree. With few thorns, the Persian lime tree grows to roughly 20 feet in height and has widespread branches that make the tree quite attractive.

As far as the fruits go, they are usually two to three inches in length and two and a half inches in width, and their color is a greenish-yellow whenever they ripen. They are shaped like the head of a lance and are usually seedless. White flowers with purple tints grow beginning in January, and the fruit has very pronounced stems.

This lime tree type hails from Southeast Asia and does best in zones 10 to 12. The tree grows up to 25 feet in height and it has fruit that gets up to two inches in diameter. Its rind is bumpy and it is green in color, but the fruit itself is very acidic and usually has very little juice.

The Thai lime is usually used in cooking, where it is normally grated or diced first, then added to specific dishes. The tree has beautiful glossy leaves that smell great when they are crushed, and it even occasionally grows tiny white flowers found in clusters of four or five.

The tree is found most often in states such as Florida and California, where it can be grown outdoors all year long.

This type of lime tree is rarely grown as a fruit tree, but rather as an ornamental one. This is partly because the limes themselves are very seedy and look more like mandarins than limes. This makes these limes very undesirable and unpopular.

Rangpur lime trees are still attractive, however, with upright and graceful shapes and dark glossy leaves. If you’re interested in a container lime tree that you’ll be proud to show off to family and friends, this type of lime tree will do. Just don’t count on using the limes in any dishes or recipes!

Found in Oman in the Middle East, Omani lime trees are small and compact. They also contain a lot of thorns, so you have to be careful when picking the fruit. The limes themselves are very small, citrusy in flavor and usually very tart and sour.

Most of the time, Omani limes are boiled in salt water, dried, and then used as a seasoning. This dried spice livens up many Middle Eastern dishes, and it usually consists of two different types of lime – black limes and white limes. Black limes have a very strong flavor, while white ones are relatively mild.

Omani limes are usually inexpensive, although the spices made from these fruits can be expensive due to the fact that they are quite rare. In the United States, Omani limes are mostly found in grocery stores that cater to Middle Eastern customers.

This is another lime tree type that is quite small; in fact, the fruit itself is not much larger than a standard-sized marble, making it extremely small compared to other limes. You won’t normally find these Australian desert limes in grocery stores, but they are included in many prepackaged products.

In fact, if you purchase marmalade and fruit that is glacéd, you are very likely to find the Australian desert lime in the list of ingredients. This type of lime is an ingredient found in many types of commercial products, proving that you don’t have to be huge to be useful.

Ironically, this tiny lime has an amazing and intense flavor, which is why it is so useful in commercial kitchens. It also comes without a rind on it.

But if decoration is what you want, look for this as the perfect lime tree.

Also called the Australian blood lime tree, the lime itself is a cross between a red finger lime and a mandarin, which is what gives it its red-orange color. In fact, it is mostly red or burgundy in color, although occasionally it comes out as a typical green color like other limes.

Blood limes are mostly found in nurseries across Australia and are grown on medium-sized trees that contain thorns. These limes have only been around since 2004, but they are close to being ready to export to areas outside of Australia.

This is a lime tree type that is often planted as an ornamental or decorative tree, and the fruits are a little smaller than a standard lime.

As you may have already guessed, this type of lime is a cross between a key lime and a kumquat, making for one very interesting fruit. Even at a young age, the limequat tree produces a lot of fruit, and the fruit itself is small, greenish-yellow in color, and contains a lot of seeds.

As long as the weather doesn’t get too cold, limequat trees can be grown either indoors or outdoors, and they are found mostly in areas such as Japan, Israel, South Africa, Spain, and the United Kingdom. They can handle cold weather better than limes, but not quite as well as kumquats do.

Limequats also have many uses. They can be eaten fresh off the tree, candied, used in fruit salads and cocktails, or included in various other dishes in numerous parts of the world. They are very acidic, but also contain a lot of vitamin C.

Most fruit that falls under this category are hybrids and are usually grouped closely with sweet lemons, which are also hybrids. This lime tree type has pulp and juice that are not very acidic, and it is similar to non-sweet limes, but with a little less citron parentage.

Sweet limes can include the Indian sweet lime, Palestine sweet lime, citrus limetta, and the lumia fruit. Often, only the experts can tell the difference between sweet limes and sweet lemons because they are so similar in size, appearance, and even taste.

In both literature and even in some nurseries that grow sweet limes, the description can be quite similar to that of sweet lemons, making it a bit confusing to tell the difference between the two. But both sweet limes and sweet lemons have important uses and are very tasty.