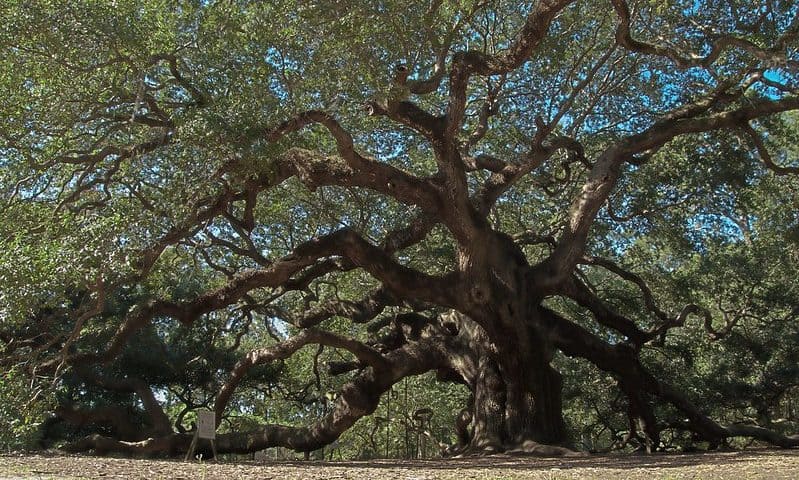 Not only is South Carolina home to tons of species of trees, but it also contains some of the largest and oldest trees in the country. Some of the many trees found in the state include the sweetgum, hickory, black walnut, yarrow, and of course, oak trees. Indeed, this is a state with a diverse selection of trees, so you are guaranteed to find them wherever you go as you travel through the state.

Oak trees are special because they are easy to grow, strong and majestic, and get relatively tall, sometimes as tall as 200 feet. Their nuts are called acorns and some get quite large, making them a great food source for wildlife of all types. The wood is strong and, therefore, has numerous commercial uses, including construction projects, furniture, and even barrels designed to hold whiskey and other liquors.

If you’d love to find out more about the 13 types of oak trees in South Carolina, keep reading.

Also called the Eastern black oak, this tree usually grows to around 80 feet high and can have trunks that get up to three feet in diameter. This is not, however, considered a large tree when it comes to oak trees. The black oak has leaves that are four to eight inches long and are shiny green on top and a yellowish-brown underneath. Although not considered a large tree, some black oak trees have gotten up to 180 feet high, which is quite impressive.

This is not a super-large oak tree because it only gets up to around 50 feet high. It has broad leaves that are three to eight inches long and which turn colors such as red and brown in the fall. The tree has small acorns that take roughly 18 months to mature, and the wood has limited commercial uses. It shouldn’t be used in wood fireplaces because it pops too much, but it can be used in wood-burning stoves and in bar-b-que pits.

Also known as the swamp chestnut oak tree, the tree grows to about 65 feet high, and its leaves are 4 to 11 inches long and two to seven inches in width, making them very large leaves indeed. In the fall, the chestnut oak leaves turn a beautiful red color, and the tree has acorns that are quite large as well, getting up to 1.5 inches in size. The chestnut oak tree often grows in rocky soil conditions, which is the reason it is also called the rock oak tree.

The laurel oak has several other names, including the swamp laurel, water leaf, and obtusa oak tree. This medium-sized tree gets 65 to 80 feet high and its leaves are one to five inches in length. In addition to pulpwood, the tree is very often used as a decorative or ornamental tree, and the acorns provide a great food source for many animals, including wild turkeys, raccoons, and birds. Although insects often feed off of the tree, the laurel oak has no serious problems with insects destroying the tree.

Also known as an evergreen oak, the tree does not become dormant during the winter months, hence the “live” description. It is a small tree with low-hanging branches and therefore, its commercial use is very limited. That being said, it has been used to make various parts of a ship but little else. When people use the term “live oak,” they are usually referring to the southern live oak, and indeed, you can find these types of trees all over the Deep South.

Native to North America, the northern red oak tree grows best in good soil that is slightly acidic. It gets to about 90 feet tall and has a trunk that is 20 to 40 inches in diameter. Some northern red oaks, however, have gotten up to 140 feet in height, although this is not the norm. The wood is reddish-brown in color and is used in construction and to finish the insides of houses. It is sometimes called the champion oak and is frequently found in public parks and gardens.

Considered a medium-sized tree at roughly 65 feet tall, the overcup oak tree has leaves that are dark-green in color and which are four to six inches long and two to four inches in width. They have a shape similar to a lyre, and the acorn nuts are encased in a structure that looks like a cup, which is of course where it gets its name. The flowers mature into acorns at six to seven months and they are roughly one to two inches long and .75-1.5 inches in width. The wood of the tree is used just like other types of white oak.

Although it grows slowly, the post oak tree is easy to grow because it does well even when soil conditions are bad. It gets no more than 50 feet high and is therefore considered a small oak tree. The acorns are also small but they mature during the first summer. Also called the iron oak, it is used in everything from fence posts to flooring and much more. In addition, it is frequently used in urban forestry because it has strong horizontal branches, an attractive crown, and because it grows so well in dry conditions. It also has the ability to survive fires because of its thick bark. The nuts provide a food source to many animals, but they are toxic to cattle because of the tannin found in the tree.

Another name for the southern red oak is the Spanish oak, and the tree is part of the red oak group. Growing from 80 to 100 feet high, the trunk of this tree can get up to five feet in diameter, making it an impressive-looking tree. The leaves grow up to 12 inches long and six inches wide, and the acorns are small and encased in a cup-like structure, covering up to one-half of the nut. If the southern red oak is grown in USDA growing zones 5a to 9b, it can survive temperatures of up to 100° Fahrenheit and as low as -20° Fahrenheit.

A member of the red oak group, the turkey oak is so named because its leaves look a lot like the foot of a turkey. It’s a small tree that gets no more than 33 feet high, although some rare turkey oaks have gotten up to 92 feet in height. The leaves can be as small as three inches or as large as 12 inches in length, and they turn a beautiful shade of red in the fall. One of the things that makes this tree so unique is that it can grow in a variety of soil conditions, including rocky, sandy soils, making them very easy to grow. Unlike other oak trees, the turkey oak doesn’t have an attractive crown, but it is still good for growing on not-so-great soils.

Growing up to 100 feet high, the water oak tree is considered a medium-sized tree in the world of oak trees. The leaves are a beautiful blue-green color and the acorns can grow singly or in pairs. Used mostly for fuel and timber, the water oak has leaves that are one to five inches long and .5 to 2 inches in width. The acorns take roughly 18 months to mature and usually do so in the fall of the second year. The tree is found mostly in lowland areas that get no more than 1,500 feet in elevation.

Don ‘t let the name of this tree fool you. It isn’t exactly white in color but light gray instead. The tree gets 80 to 100 feet high and has very large leaves, growing five to eight inches long and three to four-and-a-half inches in width. Look for the leaves to turn some beautiful colors in the fall, including red and even purple. The one-inch-long acorns usually fall off the tree in early October. Another interesting fact is that some specimens of the white oak tree live to be 450 years old. Some of its many uses include being used as an ornamental tree, the making of musical instruments, and even barrels for wine and other alcoholic beverages.

The willow oak is a fast-growing tree, gaining up to two feet every year. It grows from 65 to 100 feet tall and has trunks that can get up to 60 feet in diameter. Some willow oaks have been known to grow as high as 130 feet, but this is not the norm. The leaves are five inches long and one inch wide, and they look very much like the leaves on a willow tree. Animals such as squirrels and other wildlife love their small acorns. An interesting tidbit about this tree is that it is often used in public areas; however, it tends to grow bigger than planners expect it to and this often causes sidewalks to crack.