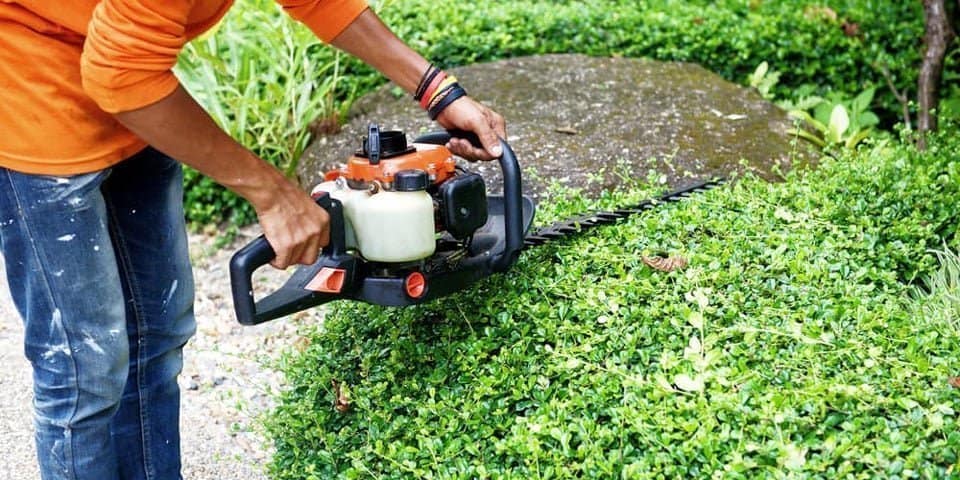 Hedge trimmers are versatile tools, that can be used for more than just shearing hedges into shape. They’re also great for clearing overgrown grass, weeds, shrubs and bushes. Take a look at at some examples of what hedge trimmers can cut.

What Is a Hedge Trimmer Normally Used for?

Hedge trimmers are simply gardening tools that are used to cut, trim, or prune plants in the garden and the yard. There are many different types of hedge trimmers and different designs, which means that buyers have a lot of choices to make when shopping.

Traditionally hedge trimmers rely on gas, but nowadays there are more and more that use electricity as their power source. Using a gas power hedge trimmer makes keeping the hedges around the home and the yard clean and neat much easier and ensures that the job will be completed faster.

While these trimmers are generally used to trim back hedges and bushes and keep them looking their best, they have other uses, as well. As long as your hedge trimmer is in good condition, working well, with sharp blades, they can power through more than you might think.

Can a Hedge Trimmer Cut Branches?

Hedge trimmers are generally used to keep hedges and bushes looking their best, but it can be really tempting to try to cut larger branches with them, especially when in a hurry to finish the yard work. Since hedge trimmers are designed specifically to trim back the tips of smaller branches on hedges, but they do not have the necessary power to cut through thick branches.

Even though they have very sharp blades on them, hedge trimmers aren’t powerful enough to handle branches, especially very thick ones. It’s a much better idea to turn to a chainsaw when you need to cut through large branches, as chainsaws are designed for this use.

Hedge trimmers have a cutting action that goes back and forth, much like a reciprocating saw. While this makes these pieces of equipment great for taking down small twigs and trimming up bushes, they simply don’t have all of the necessary power to handle branches.

Typically, hedge trimmers can cut up to 1/2 inch comfortably. Anything thicker than that is not recommended to cut with a hedge trimmer. In any case it is better to try and avoid cutting thick branches too often, as doing so will dull your blades rather quickly.

Can a Hedge Trimmer Cut Bamboo?

Bamboo can grow really quickly, leaving homeowners wondering how they are going to control it in and around their yard. Turning to a hedge trimmer to help maintain bamboo can be a good idea, but only at certain times.

Homeowners who want to clear their land of bamboo will not be able to use a hedge trimmer to complete this work, as the hedge trimmer simply doesn’t have the power and strength to cut through the thick and hard bamboo. The blades of the hedge trimmer are too small, and mature bamboo is simply too thick to be affected.

In this way, thick and mature bamboo is much like branches, and even a powerful hedge trimmer won’t be able to power through it.

However, homeowners who want to control the very top of the bamboo or the branches may be able to do so with a pole hedge trimmer. Of course, it is a good idea to really consider how thick the tips of the bamboo is, as well as how hard and sturdy it is.

While hedge trimmers may be able to cut through thinner and more flexible tips and branches of bamboo, as soon as the bamboo starts to harden, then the hedge trimmer will struggle and can easily break.

Can a Hedge Trimmer Cut Grass?

Clearing large areas of grass with a hedge trimmer can make short work of this task and allow you to efficiently mow down grass without making a lot of passes over the same area. Of course, taller grass, such as in a field, is going to be much easier to cut than shorter grass in a yard, which is something to take into consideration when thinking about this option for grass maintenance.

Before trying to cut grass with a hedge trimmer it is important to clear the area of any obstacles such as rocks or branches, as these can break the hedge trimmer. Also, make sure to put on safety clothing and tie back long hair, as it can be dangerous to use a hedge trimmer with loose clothing or hair that could get caught in the equipment.

Kneeling down is easier than trying to bend over, especially when the grass is very short. By keeping the blade completely horizontal and parallel to the ground it is possible to cut the grass. Make sure to avoid hitting the ground with the blade, as this can cause a lot of damage to the hedge trimmer.

Will a Hedge Trimmer Cut Vines?

While hedge trimmers can be used to cut weeds, vines are generally much stronger and more difficult to cut. Some vines, such as those on blackberry plants, can be cut with a hedge trimmer, but others are much too difficult, thick, and hard to keep still while cutting.

Users who do want to try to cut vines with a hedge trimmer need to start from the outside of the clump of vines and slowly work their way in a few inches at a time. By moving the hedge trimmer in a sweeping motion from side to side, it is possible to cut through vines. Take care to remove the ones that are felled so that they do not get caught in the teeth of the trimmer.

Very thick vines and ones that have a lot of movement and give to them, such as kudzu, will be significantly more difficult to cut. Some vines will simply move with the hedge trimmer and be pushed out of the way rather than being cut, and this can be very frustrating.

Will a Hedge Trimmer Cut Brambles?

Tackling smaller areas of brambles at a time and being willing to go back over the same cut area will help to make this job easier. Keeping the teeth on the hedge trimmer nice and sharp is also important, as is choosing a powerful trimmer, such as one that is gas powered. Cordless hedge trimmers can do the job as long as it’s a quality model.