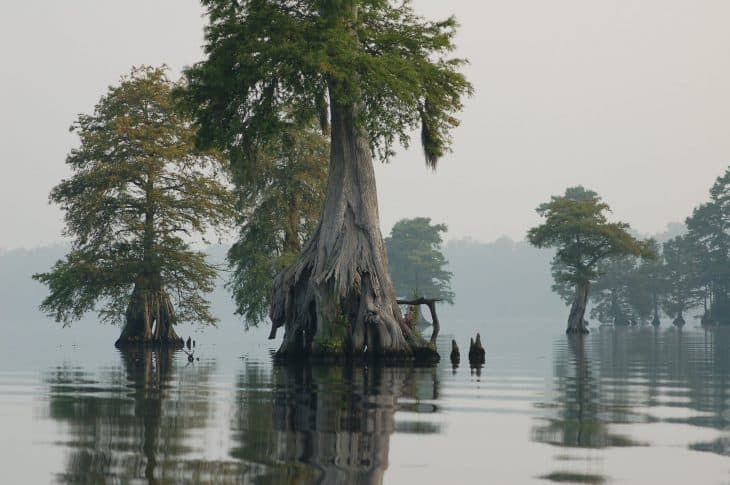 Conifers are woody plants that include trees such as spruces, pines, firs, junipers, cypresses, and cedars, among others. They are hardy trees that are usually identified by their cones, branches, and bark, and their characteristics include long needle-like leaves and the ability to stay green all year long.

Conifers are evergreens that are attractive and grow well in most of the Northern Hemisphere. Some types of conifers do great in colder climates while others prefer warmer climates. Although their foliage stays green all year long, some conifers lose their leaves at certain times of the year.

There are many ways to determine conifer tree types, and it starts by viewing how the needles are attached to the twigs. If they are grouped by two or more needles, they are known as pine trees, whereas spruce and fir trees have only one needle.

In addition, fir needles are flat and don’t roll easily between your fingers. Spruce needles always have four sides and, therefore, are able to roll between the fingers with no problems. This is the main difference between spruce and fir trees.

This is a very large tree with gray-brown or reddish-brown bark that has a stringy-like texture. Unlike many other conifer tree types, the Bald Cypress tree loses its leaves in the winter, thus, being nicknamed “bald.” It has a main trunk that is surrounded by cypress “knees,” which protrude from the ground.

Cypress wood is also very strong and sturdy and makes perfect furniture. The “knees” protruding from the ground make it a truly unique tree, and if you look closely at each branch, you’ll notice needles that are arranged in a spiral fashion on the stems.

Also known as Nootka cypress and Yellow cypress, Alaskan cedar trees are not exactly real cedars. In fact, botanists have historically had problems determining the exact scientific category this tree belongs to. The tree originated in the British Columbia area of Canada; more specifically, Vancouver Island.

This tree does best when grown in zones 4 to 7, and there is a “weeping” variety that has drooping branches and which consists of spray-like fans that are really quite attractive. The weeping variety also produce both male and female cones.

The Colorado blue spruce is a beautiful conifer, but grows unusually large in nature, making it somewhat unpopular with developers and landscapers who wish to clear it off of their lot. There are, however, dwarf varieties available for planting, and their color is absolutely stunning.

There are also many varieties of this tree, including the “Gebelle’s Golden Spring” variety, which consists of golden or creamy-colored needles and new growth that can be as showy as any flower in your garden! Due to their size and color, these seed cones are quite eye-catching.

In addition, the “Pendula” variety consists of seed cones that can be rose pink or red in color and grows in a quirky fashion, which is easily enhanced by making sure the tree gets the pruning it deserves. The “Lucretia” variety is a slow grower and grows only a few inches per year.

A very prolific spruce tree, Norway spruces are very large in size, have beautiful dark-green leaves, and have branches that droop down gracefully. The “Aurea Magnifica” has gorgeous golden needles, while the “Pusch” variety consists of small pink seed cones that look a lot like tiny roses.

In fact, there are even varieties of Norway spruces that have bright-red needles, such as the “Rubra Spicata,” which starts out as a beautiful rose shade and matures into a green color. There are also many weeping Norway spruce trees, some of which look like huge creatures and are quite electrifying.

When it comes to the Norway spruce tree, there is a lot of variety in the color of the seed cones, making this one spruce tree that will complement anyone’s outdoor area.

Popular as Christmas trees, the Douglas Fir tree often grows together with other species, most notably the white fir, Ponderosa pine, blue spruce, and aspen trees. When it comes to conifer tree types, the Douglas Fir is perhaps one of the most well-known varieties.

There are also three main types of Douglas Fir: the Coast, Rocky Mountain, and Mexican. They can grow up to 330 feet in height and have soft, flat leaves. The female cones are pendulum-shaped and have a long three-pointed bract that makes them look like they have two feet and a tail.

Douglas Fir trees also make great softwood timber and are used in making joinery, flooring, and veneer, among others. Other items made out of this type of wood include vases, canoes, and even military wooden ships, making this a very versatile type of tree.

The needle-like leaves on the Western Hemlock trees are long and broad, even flattening out and having a margin that is finely serrated. The trees have small slender cones that are green in the beginning, but mature to a gray-brown color. They do especially well in temperate rain forests.

When it comes to shade tolerance, few trees can beat the Western Hemlock. This is also a slow-growing tree and one that lives for a very long time, with some of them being over 1,200 years old.

Native to the Southeastern part of the United States, these trees get up to 115 feet in height and are known as a cultural symbol of the Deep South. In fact, the Longleaf Pine tree is the state tree of Alabama.

The needle-like leaves of the Longleaf Pine are sometimes twisted and can get up to 17 inches in length. The timber that comes from this tree has been used for building wooden naval ships, flooring, and much more. The resinous, yellow wood is used mostly for pulp and for lumber.

In addition, its leaves can be used for coiled basket-making, which is an ancient art rarely used today. The taproots and stumps of older Longleaf Pine trees are often used as kindling for fireplaces and bar-b-que pits.

Virginia Pine trees are not as large as other conifer trees and are usually found from Long Island to the Appalachian Mountains through Western Tennessee and Alabama. They can get up to 59 feet in height and usually live from 65 to 90 years.

The trees’ yellow-green needles are often twisted and their pine cones tend to remain on the trees for many years. Much of the wildlife found in the forest gets its nourishment from this tree, and it is a very popular tree to use as a Christmas tree.

Virginia Pine trees are easily identified thanks to their short, twisted needles that always come in bunches of two. The cones only open when they are mature, and they have flexible branches that will bend if you use any type of force or pressure on them.

Known for being the largest tree in the world, Redwood trees are found mostly on the West coast in northern California. They are both very large and very tall, and they usually live for thousands of years. However, thanks to air pollution and logging, the trees are also becoming endangered.

Naturally, not all genera are known to be very large in size. In fact, only two genera – the Sequoia and the Sequoia Dendron – are extremely large in size, with the rest of them being average-sized. Their existence is now being threatened because of activities such as burl poaching and climate change.

Black Spruce trees are one of the many conifer tree types that have colorful seed cones, sometimes having bright purple-dark blue cones that are truly eye-catching. They are found in the northern parts of the United States, as well as in Alaska.

In Latin, the name means “of the Virgin Mary,” and the tree can get up to 50 feet tall. In addition, of all the spruce trees in existence, the cones of the Black Spruce tree are the smallest at only 1.5” x .75”. These are stunning trees thanks to their luscious green leaves and their bright purple cones.

Because the trees tend to be small, their timber is usually not considered valuable, although it is used for pulpwood in places like Canada and even to make chopsticks for fast-food restaurants. You can even make beer and spruce gum out of the Black Spruce tree.

Also called the white spruce or the mountain spruce, this tree can grow even in altitudes ranging from 3,000 feet to nearly 12,000 feet. It grows up to 130 feet in height and has thin, scaly bark, even flaking off in some areas.

Its needle-like leaves are blue-green above and blue-white below and are quite attractive. The trees’ cones are red or dark-purple when they’re young and mature to a color that is pale-brown. They have black seeds and a slender, pale-brown wing.

Of all the pine trees in the world, the Sugar Pine is the largest and most massive. They also have the largest cones of any conifer tree, getting to almost 20 inches in length. Even the seeds in this cone are large, being almost one inch in length.

The Sugar Pine tree grows mostly in Oregon and California, as well as parts of northwestern Mexico. At one time, Native Americans ate the seeds of the Sugar Pine’s cones because they have a sweet taste to them.

The wood of the tree is used for packing fruit and storing drugs, to name a few. Because of its straight grain, the wood of the Sugar Pine tree is also used to make organ pipes.

These trees are native to North America and grow tall and straight, giving them an elegant and regal look. They have a conical crown that with age becomes a rounded narrow dome. This is a self-pruning tree without any dead branches, and you’ll notice some red in the bark’s fissures.

The needle-like leaves of the Red Pine tree are dark yellow-green and get up to seven inches in length. They are brittle and will, therefore, snap when you bend them. The symmetrical cones are 2.25” x 1” in size and start out purple, but eventually turn a nut-blue.

The Red Pine tree gets its name because the bark is thick and gray-brown at the base and thin, flaky, and bright orange-red in the upper crown. In some older trees, the trunk is branchless below the canopy area.

Native to the western United States and parts of Canada, the Western Larch tree can get up to nearly 200 feet high and has a trunk diameter of nearly five feet. Montana is home to the largest Western Larch tree known, at a height of 153 feet and a 34-foot crown.

Compared to many other conifer tree types, the Western Larch tree has short leaves at around two inches long, and they turn bright-yellow in the fall. At that time, the pale orange-brown shoots remain bare until the following spring.

The seed cones are relatively small at around two inches long, and they can remain on the tree for many years, eventually turning a dull grayish-black color. Some of its many uses include building yachts, producing Venice turpentine, and as firewood because of its unique popping sound and sweet fragrance.

Other uses have included chewing gum, using the sap to make medicine and baking powder, and using the shoots to treat illnesses such as laryngitis and tuberculosis.