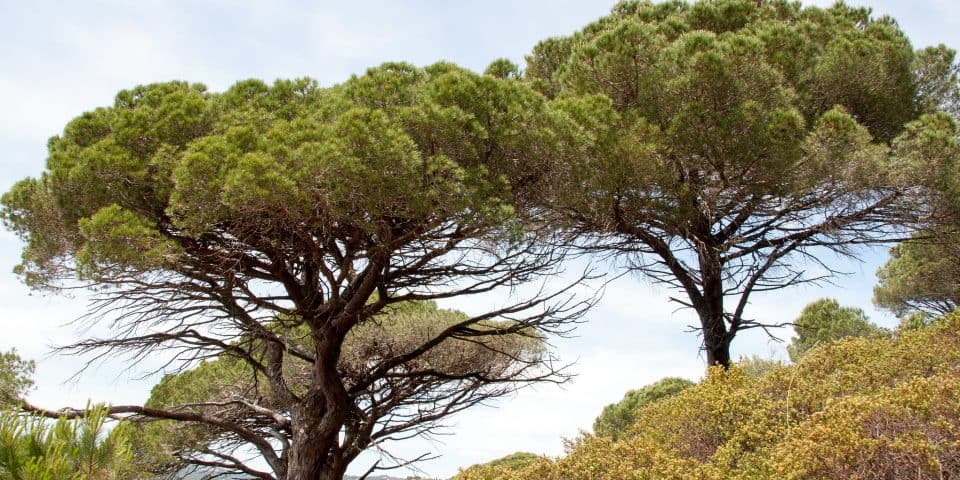 If you’re unfamiliar with the many species of pine trees in existence, they may all look alike to you but the truth is that all states, including Georgia, are home to a variety of pine trees. You can spot the differences once you become familiar with how they look. When it comes to popular trees such as pine trees, Georgia has a total of 17 different types, which are described below.

Some of the many trees found in the state of Georgia include maple, oak, hickory, and, of course, pine. Pine trees are coniferous trees with cones and seeds and have four different types of leaves, with needles being the most well-known type.

Pine trees typically get to roughly 150 feet in height, with some getting much taller. Some have male and female cones that look quite different from one another.

There are a total of 17 different pine tree types in the state of Georgia so if you love pine trees, this is the place to be. Pine wood tends to be a hard type of wood and therefore is used quite frequently in construction and building projects.

It is a very versatile wood type that can be used for other purposes as well. Following is a description of each type of pine tree in the state.

The only tree more common in the United States than the loblolly pine tree is the red maple tree, so it can be found nearly everywhere. It gets up to roughly 115 feet tall and is often seen in lowlands and swampy areas, and the needles grow in bundles of three.

Also called the Japanese pine, this type of pine tree can get up to 130 feet high and has needles found in groups of two. The needles are long and often have small points on the tips (female cones). Because the tree is resistant to both salt and pollution, you can find it in a variety of habitats in the state of Georgia, as well as Florida.

With the ability to grow up to 130 feet high, the Japanese black pine has needles that grow in groups of two and which are long and pointy when they are females. It is easy to find this tree in a variety of habitats, Georgia as well as Florida, because it is both pollution- and salt-resistant, making it a sturdy tree as well.

Eastern white pine trees have long and slender seed cones and needles that produce new growth in the summer time. Most are around 180 feet tall or a little shorter, although some have been recorded as growing to 230 feet in height.

The longleaf pine tree usually gets to around 115 feet and has a circumference of around 30 inches, but at one time it got up to 150 feet before extensive logging became the norm. If you’ve traveled a lot throughout the southern and southeastern parts of the United States, you have undoubtedly seen tons of these types of trees.

Pitch pine trees are relatively small and only get to around 100 feet tall maximum. Very common in the northeastern part of the United States, the pitch pine has needles that grow in bundles of three and a shape that is irregular and which includes twisted branches.

Pond pine trees are also called marsh pines, and they typically only get to around 70 feet in height. Their needles grow in bundles of three or four and can be a total of eight inches long. Not surprisingly, pond pine trees grow in very wet habitats that include areas close to bays, swamps, and of course, ponds.

The Pond pine is a commonly seen in the southeastern part of the USA, in the states Florida, Georgia and Alabama.

Some experts call the sand pine tree the scrub or Florida spruce pine, and you can buy it as a shrub, which gets up to roughly 33 feet high; or as a tree, which gets up to nearly 70 feet. You can find this tree in central and western Florida and into Alabama.

The slash pine tree lives for around 200 years, meaning it doesn’t live as long as many other pine trees. However, it is a fast-growing tree and is found mostly in the southeastern part of the United States, where it is used for its resin and as timber for turpentine, as well as in naval stores.

Considered a medium-sized tree because it gets up to roughly 130 feet high, the spruce pine tree grows straight and erect and has needles that grow in bundles of two. These are slender needles that are glossy dark-green in color. The spruce pine has also adapted much better to shady conditions than other types of pine trees.

Considered a type of white pine tree, the table mountain pine is found most in the Appalachian area of the United States and usually only gets to 40 feet high or smaller. The needles grow in bundles of two, and the short-stalked cones are almost completely seedless.

There are several different types of white pines, including the Eastern white pine (strobus) and the blue pine (wallichiana). Both produce hard, resinous, very durable wood that is used for everything from firewood to turpentine.

The Scots pine can grow in sandy or rocky soil and even in elevations of up to 8500 feet. The wood can be red or yellow in color. It is known by other names in other countries, including the Norway pine and Baltic pine.

The Mason pine can get up to roughly 150 feet in height and has long broad branches and thick grayish-brown bark. The leaves are needle-like and dark green in color. The cones are three inches long and have winged seeds. The wood is used mostly for lumber in the paper industry.

The Mexican pine tree is a large tree, getting up to roughly 145 feet in height. The leaves are needles that grow in bundles of five. Although it is found mostly in areas with warm climates, the tree has been known to survive in temperatures of -30֠ Fahrenheit. It also has gorgeous foliage and is therefore found in many park areas.

Also called a cluster pine, this tree grows very quickly and has small seeds with large wings on them. Its wood is very hard and used mostly for timber. It is also considered an ornamental tree and can be found in many gardens and parks, especially in areas such as Georgia that stay warm most of the year.

This pine tree is very large, getting up to roughly 180 feet tall, and it can get from 20 to 40 feet in diameter. It grows at a moderate speed and has dark gray seeds that turn to a yellowish color when they mature, which is roughly 18 months after the tree is pollinated.

Also called umbrella pine or parasol pine, stone pine trees are known for their edible pine nuts, which have been harvested and eaten since prehistoric times. In addition to being a good food source, the trees can also be used for ornamental purposes and are involved in making fuel and resin, making this a very versatile tree.