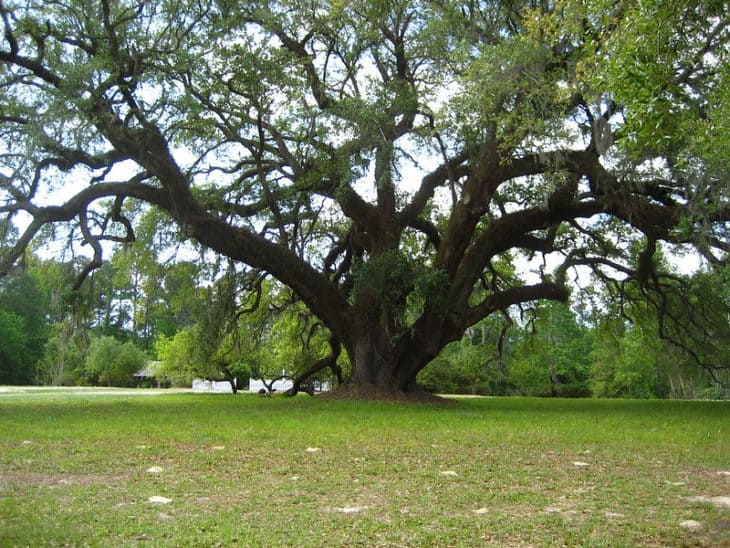 There are hundreds of species of trees in North Carolina, in part because there are mountains on one side of the state and beaches on the other, providing them with lots of different habitats. Some of the most common trees include the cypress, poplar, pine, maple, and birch; indeed, if you’re a tree lover, this is a great place to be.

Even though the loblolly pine is the most commonly found tree in the state of North Carolina, the beautiful oak tree can be found in many of its counties. There are 600 species of oak trees today. They are majestic-looking and create quite an impression.

Oak trees are actually part of the beech family and they typically have nuts called acorns that can get very large in certain species. Mostly eaten by wildlife, acorns are also used as cultural symbols in certain places and have been used in numerous drawings and other artwork.

The trees typically live 200 to 300 years, although some have lived much longer. But perhaps the thing they’re known best for is the wood of the tree, which is very hard and durable and therefore used to make everything from furniture to flooring and much more. If you’re interested in learning about the types of oak trees in North Carolina, keep reading.

The average size of the bluejack oak is around 33 feet high so it is not considered a large oak tree by any means. It has oval-shaped leaves that are glossy and green on top and have a woolly-hair look underneath. The acorn is less than an inch long and the tree itself grows in a variety of conditions. Because it is so small, the wood of the tree isn’t of much use, although it can be used to make posts and fuel.

Also called the swamp chestnut oak, this tree is part of the white oak group and usually grows to be around 65 feet tall. The leaves are four to eleven inches long and two to seven inches in width, and they turn a beautiful shade of red in the fall. As with other white oaks, the chestnut oak’s wood is used for making baskets, among other items. Its large acorns are somewhat sweet and are favored by animals such as cattle. The tree is also found in many public areas such as gardens and public streets.

The Chestnut Oak is a common sight in states like North Carolina and Louisiana.

Part of the white oak group, the chinkapin oak tree can grow in a variety of soils including sand, rocky slopes, and acidic substrates. The acorns mature in about a year and ripen in either September or October. The tree has gray, flaky bark and hard wood that is used in numerous products, including many construction projects. Known for its sweet acorns, the chinkapin oak has nuts that are edible and tasty to both wildlife and humans alike.

Also known as the water oak or the diamond-leaf oak, the laurel oak gets from 65 to 80 feet high and has a large circular crown. The leaves are one to five inches long and the acorns start out green but eventually turn a brownish-black color. Since the tree produces so many acorns, it is a popular one for surrounding wildlife. It is also a fast-growing tree and usually matures in about 50 years, which is one reason why it is often used as an ornamental or decorative tree.

Also called the southern live oak, it is considered live because it does not become dormant during the winter months. Their stiff, leathery leaves are shiny green on top and have a pale gray bottom. They can get up to six inches long and two inches wide. The acorn of the live oak tree is very small and can grow singly or in clusters. The wood is strong but somewhat difficult to work with, meaning that it is not used for items such as furniture and flooring.

The myrtle oak tree is native to the southeastern part of the United States and is frequently found in coastal areas and on sandy soils. Although it can grow to about 40 feet tall, it only grows as a shrub and not a tree if planted in drier climates. The leaves of the tree have no teeth or lobes on them and they are hairless on both the upper and lower side, except for the veins on the lower part of the leaf.

The overcup oak is best found in lowland areas in the eastern and south-central areas of the country. At roughly 65 feet in height, it is considered a medium-sized oak tree. The leaves resemble lyres, hence the Latin name, and the nuts are large and consist mostly of the cap that encases them. The overcup oak has leaves that are four to six inches long, two to four inches wide, and a very dark green on top.

Sometimes called the Spanish oak, pin oak trees get to 60 to 70 feet tall and roughly three feet in diameter, making them a medium-sized tree. It lives around 120 years, which is much shorter than the other oak trees, most of which live for several centuries. The wood of the pin oak does well in pollution; therefore, it is used frequently in landscaping and other outdoor projects.

Also called the iron oak, the post oak tree is part of the white oak group and does well in poor soil conditions, making it an easy-to-grow tree. It is considered a small tree because it rarely gets past 50 feet tall, although a few have gotten up to 100 feet. Their leaves are distinctly shaped and look similar to a Maltese cross. The acorns, though small, mature in the very first summer.

Part of the red oak section, the scarlet oak tree is native to the eastern and central parts of the United States and it prefers dry, sandy, or acidic soils. It is considered a medium or large tree because it gets from 65 to 100 feet in height. The leaves get up to seven inches long and five inches wide. The acorns are relatively small and start out green but mature in roughly 18 months to a pale brown color.

Also known as the Spanish oak, this oak tree is native to the eastern and south-central parts of the United States. They grow well even in sandy soils and can get up to nearly 100 feet tall. The acorns, which mature at the end of the second season, are small and bright orange-brown in color. A southern red oak tree was found in Maryland in 2017 that was 200 years old and had a spread of more than 102 feet.

This tree is also called the spotted oak and can get up to 115 feet in height. In the southern parts of the country, the tree is known to get a lot bigger. One of the things that makes this tree unique is its bark, which is reflective and smooth instead of rugged like most trees. The leaves can be quite large, getting up to eight inches long, and are dark green on top and a lighter green on the bottom.

The quercus shumardi is called the Shumard Oak in Louisiana and Missouri, among others. Also see all types of oaks in America.

Part of the red oak group, the water oak is native to the eastern and south-central parts of the country and typically grows to be 100 feet high and three feet in diameter. The nuts grow singly or in pairs and mature in the fall of the second year. They are also very small, getting up to only half an inch in length. The leaves are bluish-green on both the top and bottom.

Contrary to the name, the white oak is actually light gray in color. It can get up to 100 feet in height and can be 100 feet wide as well. It also lives for up to 300 years, even though a tree found in New Jersey in 2016 lived to be around 600 years old. White oak trees make great ornamental trees and have been used to make whiskey barrels and musical instruments as well as other items.

Part of the red oak group, the willow oak is medium-sized and grows from 65 to 100 feet high. The trunk can be as large as five feet in diameter, and the leaves are two to four inches long and roughly one inch wide. They are a beautiful shade of green on top and a little paler on the bottom. Because the tree’s wood is hard and grows quickly, it is often used in landscaping around malls and other public areas. They sometimes cause sidewalks to crack because they live longer than planners expect them to and they aren’t checked as frequently as they should be, which is just an interesting side note about this tree!