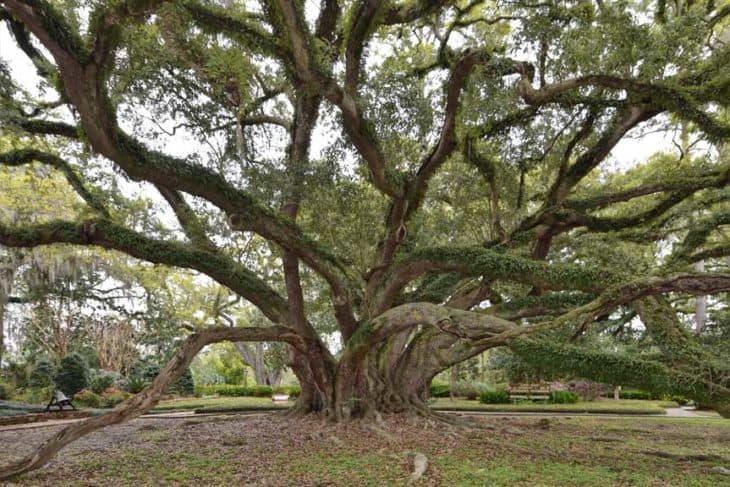 Louisiana’s warm weather means that there are lots of plants and trees in the state and you can even see lots of greenery during the winter months. If you love trees, this is the place to be because it is home to 22 state parks, one national forest, and more than 14 million acres of forests. So as you see, Louisiana is more than just swamps!

Although the bald cypress is the state tree of Louisiana, the state is known for its large, eye-catching oak trees, many of which are covered with moss. There are more than 23 species of trees in Louisiana and they are found throughout the entire state.

Oak trees are majestic; they usually get to about 100 feet high and their trunks can get up to five feet in diameter. The trees are mostly known for their hard wood, which is used frequently in making furniture, flooring, and much more.

Oak trees also live for 200 to 300 years and a few have lived as long as 600 years so you can enjoy them for a very long time. If you’re researching the types of oak trees found in Louisiana, below are descriptions and foliage photos of each.

Despite its name, the black oak tree is part of the red oak family and it is considered a small tree because it usually grows no more than 80 feet high. It can have a trunk that is 35 inches in diameter and it has been known to hybridize with about a dozen other trees. It prefers soil that is moist but can grow in both cool and warm climates.

The leaves of the black oak tree are typically four to eight inches long and a shiny green color on the top. With a brownish-yellow color underneath the leaves, the tree has medium-sized acorns and caps that cover roughly half the nut.

The blackjack oak tree is a small oak tree that typically grows to no more than 49 feet. The tree can grow in poor soils and is therefore a very easy tree to grow.

Some people are not impressed with the blackjack oak because it isn’t as majestic or attractive as other oak trees; nevertheless, it is a tough tree whose wood can be used in barbecue grills and wood-burning stoves.

It typically isn’t used in fireplaces, however, because it tends to pop a lot; therefore, the chances of a fire starting are a lot higher than with other types of wood.

The Blackjack oak is a common sight in southern states such as Louisiana and Missouri.

The laurel oak tree is also called a diamond-leaf or water oak and it grows to 65 to 80 feet in height. The leaves are one to five inches long and the tree produces so many acorns that it tends to be a favorite among various wildlife.

Fast-growing, the laurel oak matures in roughly 50 years and it is often used as a decorative or ornamental tree. The acorns are plentiful and start out green in color but eventually turn to a brownish-black color. This tree also has a beautiful large circular crown, making it quite an eye-catcher.

The Nuttall oak tree is fast-growing and very large, getting up to 83 feet tall. It grows most frequently in the Mississippi River Valley in the southeastern part of the country and it has a beautiful red color when the fall comes.

This type of oak tree has leaves with sharp pointed lobes and is similar to the pin oak and the Georgia oak. It is especially popular in horticulture because it is easy to transport and does well in wet soils.

It has dark brown bark and is found as far as eastern Texas, southeastern Oklahoma, and southeastern Missouri as well as parts of western Kentucky.

Native to North America, the red oak tree is most frequently found in the southeastern and south-central parts of the United States. Also called the champion oak, this tree gets up to roughly 90 feet tall and has a trunk that can get up to three feet in diameter.

The bark is a dark reddish-gray to brown color and the leaves can get up to nine inches long and six inches in width. The acorns mature in 18 months and grow either singly or in pairs. They are small and start out green but mature to a chestnut-brown color.

Also called the spotted oak, the shumard oak gets up to 115 feet tall and can get even bigger in certain areas of the country. Instead of rough bark as with other types of trees, this tree has smooth and reflective bark, which is one of its most unique characteristics.

The leaves get up to eight inches in length and are dark green on top with a lighter green color underneath. Yet another name for this tree is the swamp red oak.

Part of the white oak group, the chestnut oak — sometimes called the swamp chestnut oak — gets to roughly 65 feet in height. The leaves are four to eleven inches long and two to seven inches wide. In the fall, you’ll love their beautiful red color.

If you ever purchase a basket from a store, it will often include the wood of the chestnut oak tree. Cattle love the acorns of the tree because of their slightly sweet taste. The tree is a popular one for public areas such as streets and gardens.

The water oak tree is part of the red oak group and is native to the south-central and southeastern sections of the United States. They can get up to 100 feet high and three feet in diameter.

The acorns, which mature in the fall of the second year, always grow either singly or in pairs. The nuts are small, usually getting to only half an inch in size, and the leaves are a beautiful bluish-green color. They are darker on the top of the leaves than they are underneath but their bluish-green tint tends to make them stand out among the other nearby trees.