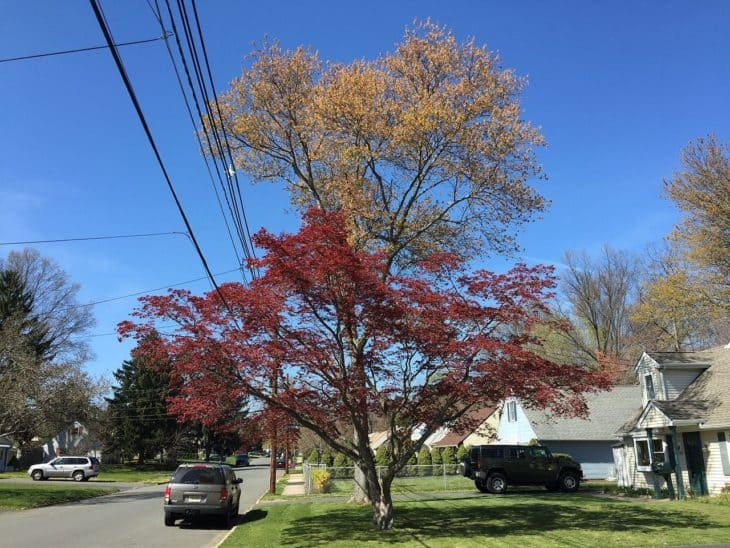 In New Jersey, there are many trees native to the state, and they include the Hazel alder, Silver bell, Tulip tree, Flowering dogwood, Sweet birch, American holly, Black spruce, and the Red oak. This doesn’t mean there aren’t other trees, however, as you can find numerous species throughout the state, including the maple tree. These are the 3 most common types.

Roughly 45% of the land in New Jersey is covered in forests, and in these locations you’ll find a number of species of trees. This includes several types of maple, which are strong, large trees that do a great job at providing shade and at brightening up the landscape during the fall season when its leaves turn all shades of yellow, orange, and red.

Maple trees are great trees because they are so strong, and they can even grow in a variety of soil and site conditions, which means they are also able to withstand a lot of abuse. They are even drought-resistant, making them ready to be grown almost anywhere.

If you’re considering the maple tree for your yard or garden area, below are some details about each of the types available in New Jersey, making it easy for you to decide which one is best for you.

Red maple trees can also be called soft maples, although the wood is not too soft to make items such as musical instruments, veneer, and even furniture. Red maple is the most abundant native tree in the eastern part of the United States, in states such as Maine, Michigan as well as Kentucky and Tennessee, and it matures to be roughly 100 feet in height. It is also very adaptable thanks to the fact that it can grow just about anywhere, regardless of the surrounding soil and site conditions.

Red maples do well in urban areas because of its large root system, and in addition to everything else, the sap is used to make the tasty maple syrup that everyone loves.

The Ashleaf maple is also called the Box Elder maple, and it grows fast, but is short-lived. Ashleaf maples are found in most continents across the globe, and the largest ones grow to 80-feet in height. In addition, the tree often forms more than one trunk, and it usually lives for up to 60 years.

The wood of the tree is close-grained and rather soft, so it isn’t used too much commercially. It does, however, get used as fiberboard and for items such as pens, bowls, and stemware, among others.

The Scarlett maple is a cultivar of the Red maple tree and has leaves that look similar to the leaves on a Silver maple, which means they have five lobes. This is another type of maple tree that grows very fast, and the leaves are yellow-orange to orange-red in color during the fall months.

Although other types of maples are used more often to make syrup, the Scarlett maple tree is sometimes used and produces great-tasting syrup. They do, however, need to be harvested before the buds occur, which means their harvesting season is fairly short.