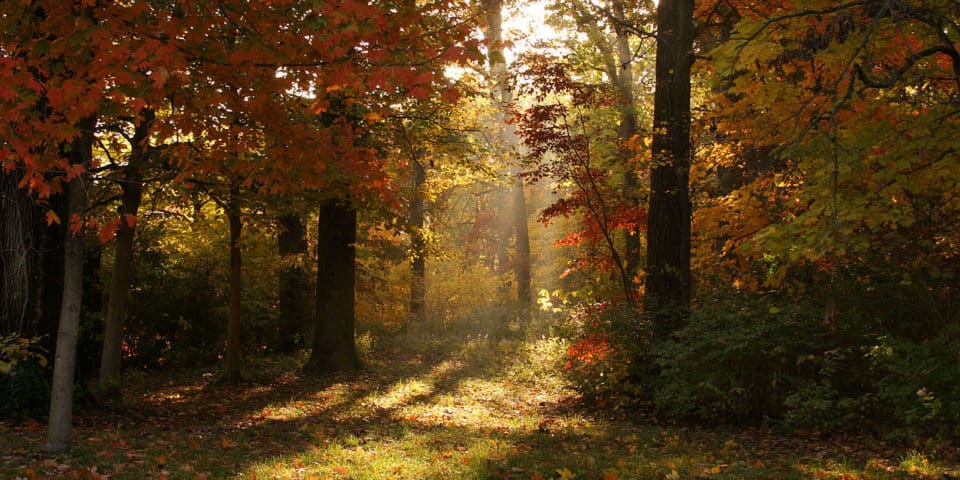 Illinois has 142 state parks and two national forests, which means you can find a lot of trees throughout most of the state. Between prairie lands, hill country, and swamps, you can find various trees that include oak, sweetgum, elm, sycamore, holly, hickory, walnut, and ash, among many others. These are the four commonly seen maple trees in the state of Illinois.

The state tree of Illinois is the white oak tree, but maples are common sites throughout the state, and they add to the beauty of each area in the fall when their leaves turn into gorgeous displays of yellow, orange, and orange-red beauty. If you’ve never been to this part of the country in the fall, you owe it to yourself to make that trip.

Because maples are found in Europe, Asia, and North America, most people know what they look like. They consist of 128 species, although most of these are native only to Asia. Maple trees can be as small as 33-feet or as tall as 148-feet, although most maples are somewhere in between. There are also shrubs that are part of the maple group, such as acer campestre.

Four types of maple trees can be found in Illinois, so if you’re looking for this type of tree because you want to plant maples in your yard, you can read the descriptions below to find out more about each of them.

If you want a maple tree that gets to roughly 100 feet tall, the red maple is what you want. The most abundant native tree in the eastern part of the United States, the red maple tree has leaves that are somewhat different from one another. It is also a sturdy tree, in part because it can adjust to many soil types and growing conditions.

A deciduous tree that grows fairly fast, the silver maple tree is found mostly in the eastern and central parts of the country, as well as the southeastern part of Canada. It gets from 36 to 49 feet in height and is also called the swamp or water maple because it is found near wet areas such as wetlands and waterways.

This type of maple also has leaves with five lobes and which shed faster than many other types of maple trees. The wood from the tree is used to make pulp, lumber, crates, and even tool handles, among others.

One of the most unique characteristics of the sugar maple tree is the fact that it has some of the brightest, most gorgeous leaves during the fall season. It is also the main type of tree used to produce maple syrup, thanks to the texture and taste of the sap. Also called the rock maple, sugar maple trees grow to roughly 115 feet in height, although they have been known to grow as high as 150 feet.

The leaves of this beautiful tree have five lobes and get up to eight inches in length, making them an exquisite type of leaf. Their fall colors include orange, yellow, and bright orange-red, and this is an easy-to-grow tree as well. The latter is also why the sugar maple is commonly found in large public areas, such as gardens and parks.

It is commonly found in Illinois as well as in Maine and Massachusetts.

This is a slight variation of the red maple tree and gets up to over 40-feet in height. It is common throughout the Midwest and the southeastern part of the United States, and it is especially common in wetlands and other areas that get a lot of rain. Its leaves are a little different from other red maples because they are white and have a felt-like feel on the back side of the leaves. The back side is also a little fuzzy.